The Ramblers by Aidan Donnelley Rowley 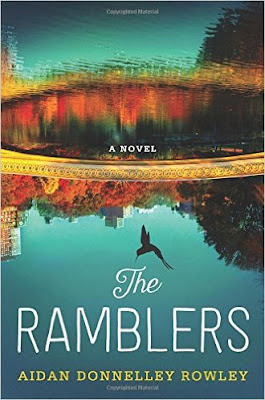 For fans of J. Courtney Sullivan, Meg Wolitzer, Claire Messud, and Emma Straub, a gorgeous and absorbing novel of a trio of confused souls struggling to find themselves and the way forward in their lives, set against the spectacular backdrop of contemporary New York City.

Set in the most magical parts of Manhattan—the Upper West Side, Central Park, Greenwich Village—The Ramblers explores the lives of three lost souls, bound together by friendship and family. During the course of one fateful Thanksgiving week, a time when emotions run high and being with family can be a mixed blessing, Rowley’s sharply defined characters explore the moments when decisions are deliberately made, choices accepted, and pasts reconciled.

Clio Marsh, whose bird-watching walks through Central Park are mentioned in New York Magazine, is taking her first tentative steps towards a relationship while also looking back to the secrets of her broken childhood. Her best friend, Smith Anderson, the seemingly-perfect daughter of one of New York’s wealthiest families, organizes the lives of others as her own has fallen apart. And Tate Pennington has returned to the city, heartbroken but determined to move ahead with his artistic dreams.

Rambling through the emotional chaos of their lives, this trio learns to let go of the past, to make room for the future and the uncertainty and promise that it holds. The Ramblers is a love letter to New York City—an accomplished, sumptuous novel about fate, loss, hope, birds, friendship, love, the wonders of the natural world and the mysteries of the human spirit.

This book centers on the life of three people.

First, there is Clio Marsh. She works for a museum as a curator but she has a passion for birds. She recently returned from her trip through the Ecuadorian Andes. She has been following hummingbirds. She's in love with Henry but she's hiding a secret from him. They met in the park where they share a quiet conversation. Henry is Irish and has recently opened his new hotel to the public. He's older than Clio but she has brought happiness to his life. He never thought he would want a partner or kids but now he's ready to move forward together.

Then, there is Smith Anderson. She had a great education and now she works organizing people's homes. She comes from a rich family and she still lives in their NY home. The man she loved left her a year ago without an explanation. Not soon after, her sister became engaged and the wedding is happening soon. Smiths is Clio's best friend. They have known each other since college. Smiths can't help but feel like she's staying behind, first by Clio who might leave with Henry or her sister by getting married.

Last, there is Tate Pennington. He was in the same class as Smith in college and he has made a recent fortune developing an app. Now, he has moved to NYC and he's interested in making photography his future. He's still going through a painful divorce from the only woman he has loved.

I like books like this one. They have a sense of realism. These four people have experienced loss in very different ways. Yet, in a way, they are helping each other heal. They are surviving beyond despair. Adapting. Seeking new beginnings. Moving forward. Living.

I can't say I have a favorite character because I liked both couples. They felt real with real flaws and real emotions. Although, I think Henry was pretty awesome. He was stoic in his support for Clio.

I won't deny I would have liked an epilogue. Maybe one showing me where they were a year later.

Aidan, a native New Yorker, spent hours researching at the Museum of Natural History doing behind-the-scenes tours of the Ornithology Department and conducting interviews with the on-staff ornithologists as part of her writing process. And each scene in the book is essentially a love letter to the New York, the city she knows and captures so well. She's also the founder of the Happier Hour Literary Salons, which have reinvigorated the Upper West Side literary scene.
Posted by MrsLeif at 8:00 AM