He Will Be My Ruin
by K.A. Tucker 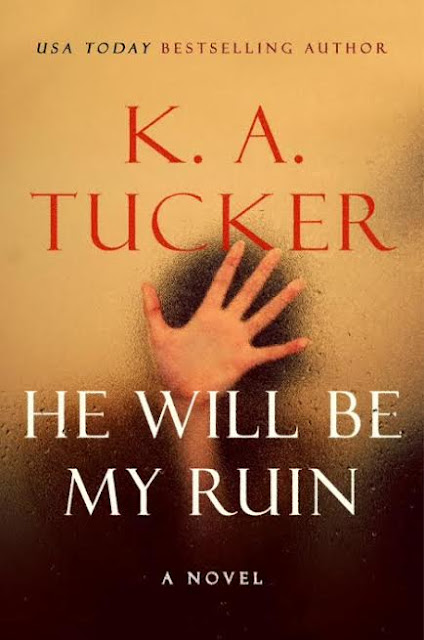 The USA TODAY bestselling author of the Ten Tiny Breaths and Burying Water series makes her suspense debut with this sexy, heartpounding story of a young woman determined to find justice after her best friend’s death, a story pulsing with the “intense, hot, emotional” (Colleen Hoover) writing that exhilarates her legions of fans.

On the surface, Celine Gonzalez had everything a twenty-eight-year-old woman could want: a one-bedroom apartment on Manhattan’s Lower East Side, a job that (mostly) paid the bills, and an acceptance letter to the prestigious Hollingsworth Institute of Art, where she would finally live out her dream of becoming an antiques appraiser for a major auction house. All she had worked so hard to achieve was finally within her reach. So why would she kill herself?

A man who was supposed to be her salvation . . .

Maggie Sparkes arrives in New York City to pack up what’s left of her best friend’s belongings after a suicide that has left everyone stunned. The police have deemed the evidence conclusive: Celine got into bed, downed a lethal cocktail of pills and vodka, and never woke up. But when Maggie discovers a scandalous photograph in a lock box hidden in Celine’s apartment, she begins asking questions. Questions about the man Celine fell in love with. The man she never told anyone about, not even Maggie. The man Celine believed would change her life.

Until he became her ruin.

On the hunt for evidence that will force the police to reopen the case, Maggie uncovers more than she bargained for about Celine’s private life—and inadvertently puts herself on the radar of a killer. A killer who will stop at nothing to keep his crimes undiscovered.

Edging along the side of her bed—I actually have to turn and shimmy to fit—I move toward a stack of vintage wooden food crates that serve as a nightstand. A wave of nostalgia washes over me as my finger traces the heavy latches and handmade, chunky gunmetal-gray body of the antique box sitting next to the lamp. The day that I spied it in an antique store while shopping for Celine’s sixteenth birthday, it made me think of a medieval castle. The old man who sold it to me said it was actually an eighteenth-century lockbox.
Whatever it was, I knew Celine would love it.
I carry it over to the living room, where I can sit and open it up. Inside are sentimental scraps of Celine’s life. Concert stubs and random papers, a dried rose, her grandmother’s rosary that Rosa gave to her. Rosa is supremely religious, and Celine, the ever-devoted daughter, kept up appearances for her mother, though she admitted to me that she didn’t find value in it.
I pull each item out, laying them on the trunk coffee table until I’m left with nothing but the smooth velvet floor of the box. I fumble with a small detail on the outside that acts as a lever—remembering my surprise when the man revealed the box’s secret—until a click sounds, allowing me to pry open the false bottom.
Celine’s shy, secretive eyes lit up when I first showed her the sizeable compartment. It was perfect for hiding treasures, like notes from boys, and the silver bracelet that her senior-year boyfriend bought her for Valentine’s Day and she was afraid to wear in front of Rosa. While I love Rosa dearly, she could be suffocating sometimes.
My fingers wrap around the wad of money filling the small space as a deep frown creases my forehead. Mostly hundreds but plenty of fifties, too. I quickly count it. There’s almost ten thousand dollars here.
Why wouldn’t Celine deposit this into her bank account?
I pick up the ornate bronze key and a creased sheet of paper that also sits within. I’m guessing the key is for the desk. I’ll test that out in a minute. I gingerly unfold the paper that’s obviously been handled many times, judging by the crinkles in it.
My eyes widen.
A naked man fills one side. He’s entrancingly handsome, with long lashes and golden-blond tousled hair and a shadow of peach scruff covering his hard jawline. He’s lying on his back, one muscular arm disappearing into the pillow beneath his head, a white sheet tangled around his legs, not quite covering the goods, which from what I can see, are fairly impressive. I can’t tell what color his eyes are because he’s fast asleep.
“Well then . . .” I frown, taken aback.
I’m not surprised that Celine could attract the attention of a guy like this. She was a gorgeous young woman—her Mexican roots earning her lush locks, full lips, and voluptuous curves tied to the kind of tiny waist that all men seem to admire.
Nor am I surprised that he’s blond. It has always been a running joke between us, her penchant for blonds. She’s never dated anything but.
But I am surprised that she’d have the nerve to take—and print out to keep by her bed—a scandalous picture like this in the first place.
I wonder if she ever mentioned him to me. She always told me about her dates, utter failures or otherwise. Though it’s been years since she was seeing anyone seriously, and she was definitely seeing this guy seriously if she was sleeping with him. Celine usually waited months before she gave that up to a guy. She didn’t even lose her virginity until she was twenty-two, to a guy she had been dating for six months and hoped that she would one day marry. Who broke up with her shortly afterward.
So who the hell is this guy and why didn’t I ever hear about him? And where is he now? When were they together last?
Does he know that she’s dead?
Worrying my bottom lip between my teeth—it’s a bad habit of mine—I slowly fold the paper back up. Celine’s cursive scrawl decorates the back side in purple ink. Words I hadn’t noticed before.
Words that make my heart stop now.
This man was once my salvation. Now he will be my ruin.

Celine and Maggie have been friends since they were children. Now, in their late twenties, they’re both pursuing careers halfway across the world from each other. When Maggie gets a phone call that Celine has killed herself she immediately rushes to New York City to help pack Celine’s apartment.

As Maggie begins packing Celine’s apartment she discovers that there was so much in Celine’s life that she wasn’t aware of. The more she finds out the more she believes that Celine’s death wasn’t a suicide, but a staged murder.

Guys, I am usually so good about figuring out the mystery in books, but K.A. Tucker had me so stumped. I felt like every time I had it figured out something else would pop up and make me question everything I believed.

K.A. Tucker is such a phenomenal writer and I am now convinced that she can write anything and it will be perfect. HE WILL BE MY RUIN started off a little slow for me, but once it picked up it kept the momentum until the very last page.

I love everything K.A. Tucker writes and I can’t recommend her books enough. If you’re looking for a story that will throw you through loops and keep you hooked until the end, pick up HE WILL BE MY RUIN. 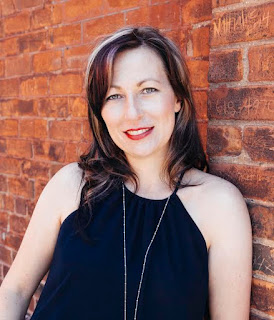 a Rafflecopter giveaway
Posted by MrsAlcide at 10:00 AM

Email ThisBlogThis!Share to TwitterShare to FacebookShare to Pinterest
Labels: Review Atria, He will be my ruin, K.A. Tucker, Mystery, thriller