Dream a Little Dream (The Silver Trilogy, #1)
by Kerstin Gier 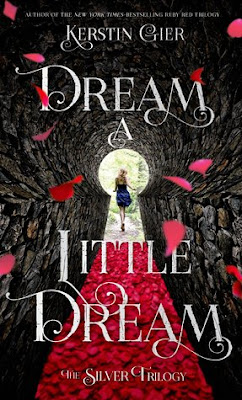 Mysterious doors with lizard-head knobs. Talking stone statues. A crazy girl with a hatchet. Yes, Liv's dreams have been pretty weird lately. Especially the one where she's in a graveyard at night, watching four boys conduct dark magic rituals.The strangest part is that Liv recognizes the boys in her dream. They're classmates from her new school in London, the school where she's starting over because her mom has moved them to a new country (again). But what's really scaring Liv is that the dream boys seem to know things about her in real life, things they couldn't possibly know--unless they actually are in her dreams? Luckily, Liv never could resist a good mystery, and all four of those boys are pretty cute....

This was a book that I wanted to love, but I ended up just feeling "meh" about it. I didn't hate this book, but it definitely wasn't as great as I was hoping it would be. There were things that I really liked about this book, but there were also a lot of things that annoyed me. This book just left me feeling conflicted.

What I liked the most about this this book was the fantasy aspect. Honestly, that was a majority of the reason why I kept reading this book. I just thought the dream walking was so interesting. I was glued to the book because of that aspect alone. I thought it was really exciting to learn about. I thought Gier did a great job of keeping the book entertaining in the fantasy department.I really liked the one character, Grayson. I thought he was a nice and caring guy. I definitely would like to read more about him. I also liked Henry. Henry was a bit mysterious, but he was very charming!My least favorite character of the book was the main character, Liv. Gosh, she was quite annoying and immature. She had moments where I thought she was quite brave, and I admired that. However, I really disliked her as a whole. One my biggest pet peeves with her (and a lot of the characters actually) was how much she focused on looks. I felt like Liv mentioned in every chapter how good looking one of the boys was, or she talked about how the boys were checking her out (especially her legs). Honestly, it made me want to throw my book.

The romance was pretty lack luster in my opinion. I really didn't see or feel the "connection" between Henry and Liv. Their romance felt like it was kind of just thrown in there for the heck of it. They had some cute moments, but they weren't anything spectacular. This book felt slow sometimes and certain aspects of the book felt dragged out. However, it was still an enjoyable book. I didn't love it, but it wasn't the worst thing I have ever read. I plan on reading the next book because I still love the fantasy aspect of this book. I am hoping Liv has some character development so she isn't so infuriating. 3 / 5 Fangs
Posted by MissDaemon at 8:30 AM