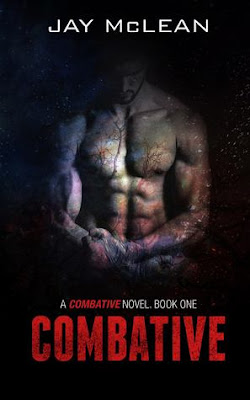 We all play victims to our pasts; to the choices we make and the lives we create.
They define who we are.
And sometimes if we're lucky enough, the past stays where it belongs: in the past.
I'm not one of the lucky ones.
I never have been.
Because now the past is knocking on my door, offering deals I have no choice but to take… deals that will help bring justice—not just for me, but for my brothers.

The problem?
The deal is a ticking time bomb.
One I didn't know existed.

I'm a huge fan of Jay McLean's work and The More Series has a special place in my heart.
I wanted to read Combative but I heard it had a cliffhanger. Now, that Redemptive is coming out soon, I knew I could dig in without much wait time.

The main characters in Combative are Kyler Parker and Madison Haynes. They are both in their early twenties.

Ky has recently returned to his hometown after four tours in Afghanistan. He's dealing with a lot of guilt, regret, and rage. This rage could lead to time behind bars unless he helps the cops dig up information on an underground fighting ring boss Nate Deluca,  who is linked to drugs. Ky accepts the mission and he immerses himself in the fighting scene. He starts his training for a future underground fight. Not too long after he meets the crime boss, then he meets his new neighbor Maddy. They meet when she's trying to open his mailbox by mistake. His new neighbor intrigues him. Little by little, Maddy seems to be breaking all the walls he has erected around his heart.

Maddy has a sad past, of that I'm sure. She seems to be broken and she appears to have some medical issues as well. She is very mysterious and secretive. More than once I found myself thinking that she was trying too hard to be inside Ky's radar. On the other hand, she had an innocence surrounding her. It was confusing. I was mistrustful of her motives.

Overall, I liked both characters. I liked that the book is mostly from Kyle's POV. You get to know Kyle pretty well. For all his horrible past he survived, he is a pretty decent guy. Yes, he is full of guilt and regret but he has a good heart. He cared about the people who loved him. Even if he didn't know how to express it.

Maddy was harder to read. She's still keeping secrets. So the jury is still out in regards to her.

I'm looking forward to reading Redemptive. I'm guessing we are going to get more of Maddy's POV in it.