Dare to Run by Jen McLaughlin 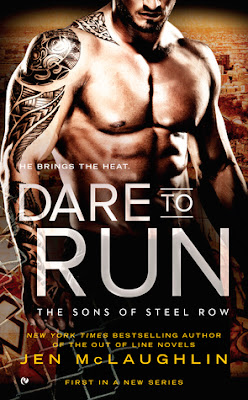 The New York Times bestselling author of the Out of Line Novels takes readers to Boston, where one gang of criminals knows how being bad can be so good...


She knows what he’s like on Boston’s mean streets. Now she’s going to find out if he’s got some heart.


Lucas Donahue is not ashamed of his criminal past, but after a brief stint in prison, he’s ready to go legit and live a normal life. The problem is, no one leaves the gang without permission—even if he is one of the boss’s top men. Plus someone’s placed a hit on him. And then there’s that feisty little bartender who’s going to cause him even more trouble.


Heidi Greene knows to keep her distance from a ladies’ man like Lucas—even if she can’t keep her eyes off him. When he rescues her from an attack in the alley outside her bar, she’s forced to stay by his side for safety. But the longer she spends time with him, the greater her chances are for getting hurt in more ways than one.

Heidi Greene knows what it means to be hungry. She left home as a teenager once she realized her life was in danger. She has lived on the streets until a bar owner took pity on her. She is now the owner of said bar and even though, she would like to leave, she can't leave the legacy he left her.

Lucas Donahue just got out of prison. He keeps the secrets of his gang, the Sons of Steel Row but before he was released someone attempted to murder him. When he is free, his best friend alerts him of the danger. Someone is after him and if he doesn't pay attention, he could end up dead. Lucas usually doesn't get involved in other people's life but he has a soft spot for the bartender. When she is attacked in the ally behind her bar, Lucas can't stop himself from jumping in and helping her. To protect her, he moves into his home.

Dare to Run had two very interesting characters. Heidi and Lucas knew how to survive. Heidi knew that Lucas had an illegal job but she still falls for the man and she accepts him the way he was.

Lucas was a loyal employee. He took the job to help with the medical bills his mom kept on accumulating. He never hurt anyone who didn't need to be hurt.

“This is a mistake, but, sweetheart, I’ll make sure that I’m the best mistake you’ve ever made,”

I was very pleased with the end of the story.  It left it open for other characters to get their own book too.