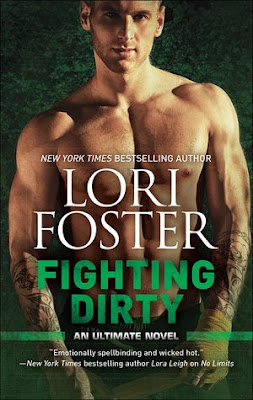 He's the hottest MMA fighter in the game, but one woman is ready to try out a few steamy moves of her own in an unforgettable new novel from New York Times bestselling author Lori Foster...
With the life he's led and the muscles he's gained, Armie Jacobson isn't afraid of anything. Except maybe Merissa Colter's effect on him. It's not just that she's his best friend's little sister. Fact is, she deserves better. Women pursue him for one night of pleasure, and that's all he wants to offer. Until rescuing Merissa from a robbery leads to the most erotic encounter of his life.
Good girl meets bad boy. It's a story that rarely ends well. But Merissa is taking matters into her own hands. No matter how he views himself, the Armie she knows is brave, honorable and completely loyal. And as past demons and present-day danger collide, they're both about to learn what's truly worth fighting for…

"You own me, Stretch. For better or worse. Today and forever."

Merissa Colter can't seem to forget the kiss she shared with Armie Jacobson. She has loved him since she was a teenager and now that she is a grown up, she hopes he can see her as a woman and not his best friend's little sister.  Convincing Armie of it, is proving to be anything but easy since he continuously pushes her away.

Armie Jacobson likes to play the field. He gives women what they want without asking for more. The only woman who makes him crazy is the only woman he won't allow himself to have. Armie feels like he doesn't deserve her and he's not worthy of her love. He also feels guilty about Cannon, Merissa's brother. He is sure Cannon would want someone better for her. Only when Merissa's life is in danger is when Armie steps up to protect her.

This is my second Lori Foster book and I knew I liked her as a writer. Both characters were well developed. The story had romance, steamy scenes and a great deal of suspense.

The thing I liked the most about Merissa is that she was open about her feelings and she trusted Armie. I felt like she knew him better than he knew himself. At some point, she felt like her crush on him was not going anywhere and she tried to move forward but as soon as she realized she was never going to fall for the other guy, she cut him loose. I also liked that when she felt in danger she asked for help and she listened to her friends, brother, and Armie.

Armie was harder to read. He had secrets and insecurities but at the same time, he had a great heart and was involved in helping kids at the rec center. He had a tough upbringing between a mother who pulled a disappearing act and a father who only wanted to take advantage of him. Despite his awful childhood, Armie had made a name for himself. His MMA fighting career is on the rise despite his past. Once he was with Merissa, other women were gone from his radar.
I hate when in books, the guy goes and sleeps with some other girl to push the heroine away or to forget her. Thankfully, my man Armie was not a dummy.

I do like the sense of family that the secondary characters bring to the story and I can't wait to see what happens in the next book.