Find Her
by Lisa Gardner 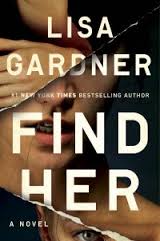 Flora Dane is a victim.
Seven years ago, carefree college student Flora was kidnapped while on spring break. For 472 days, Flora learned just how much one person can endure.
Flora Dane is a survivor.
Miraculously alive after her ordeal, Flora has spent the past five years reacquainting herself with the rhythms of normal life, working with her FBI victim advocate, Samuel Keynes. She has a mother who’s never stopped loving her, a brother who is scared of the person she’s become, and a bedroom wall covered with photos of other girls who’ve never made it home.
Flora Dane is reckless.
. . . or is she? When Boston detective D. D. Warren is called to the scene of a crime—a dead man and the bound, naked woman who killed him—she learns that Flora has tangled with three other suspects since her return to society. Is Flora a victim or a vigilante? And with her firsthand knowledge of criminal behavior, could she hold the key to rescuing a missing college student whose abduction has rocked Boston? When Flora herself disappears, D.D. realizes a far more sinister predator is out there. One who’s determined that this time, Flora Dane will never escape. And now it is all up to D. D. Warren to find her.

“There’s not much to do day after day trapped inside a coffin-sized box. In fact, there’s really only one thing worth imagining, obsessing, contemplating minute by minute, hour after terrible hour. One thought that keeps you going. One focus that gives you strength. You’ll find it. You’ll hone it. Then, if you’re anything like me, you’ll never let it go.
Revenge.”

I honestly think this is one of the best books I’ve ever read. From the first chapter I was holding my breath, sitting on the edge of my seat violently clutching the book and flipping pages as rapidly as I could.

Flora has endured more than anyone ever should. Being kidnapped and held captive for over a year she is more than a surviver. But when she returns home and tries to get back to normalcy it’s way easier said than done. She’s living with a past that she shares with no one. A past that still haunts her everyday of her life.

When Flora tangles herself with three other missing women detective D.D. Warren fights against the clock to find out what happened to Flora, but everything is not what it seems.

“Pain is a symphony. A song of varying intensities and many, many notes. I learned to play them. No longer a helpless victim in a sea of suffering but a mad orchestral genus directing the music of my own life.”

One of my biggest fears, and I’m sure anyones, is being taken and held completely captive. The thought of never seeing my family again and waking up everyday fighting for my life, fighting for my sanity is terrifying. Lisa Gardner took that fear and made it stronger. The description of Flora’s captivity for 472 days was horrifyingly beautiful. Horrifying because of the situation, but beautiful because the writing couldn’t have been better. I felt sick to my stomach and had chills running up and down my arms. Page after page I was disgusted but I couldn’t stop reading. I had no know what was happening!

The set up of the story made reading fast paced and intriguing. The chapters were short and broken down into different POV’s: the POV of detective D.D. Warren and the POV of Flora, thinking about her time with her kidnapper, or in the present. The back and forth was put together perfectly to fit the twists and turns. I truly pride myself into knowing where books are going but I had no idea what was going to come next. One minute I thought I had it all figured out and then three pages later that was disproved and something totally blew me away. There were times when a big moment would happen and I’d have to close the book and stare, thinking about what I just read.

I will be recommending FIND HER to anyone who reads. It kept me engrossed and terrified for hours. Truly, one of the best books I’ve ever read.

“Do you know what the hardest part about survival is, Detective?”

“Living with it. Every rescued person I’ve ever debriefed. They were so sure if they could just escape, just get through the ordeal, they’d never complain, never want, never suffer again. My primary job is helping them understand that won’t be the case. Survival isn’t a destination. It’s a journey. And most of the people help, they’re still getting there.”

5/5 FANGS
*Complimentary copy provided by publisher in exchange for an honest review!

Posted by MrsAlcide at 4:14 PM