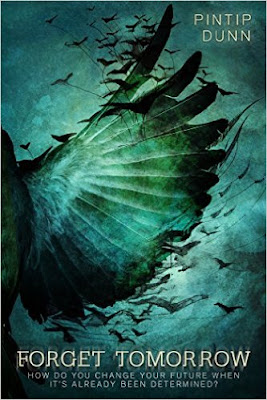 Imagine a world where your destiny has already been decided...by your future self.It's Callie’s seventeenth birthday and, like everyone else, she's eagerly awaiting her vision―a memory sent back in time to sculpt each citizen into the person they're meant to be. A world-class swimmer. A renowned scientist.Or in Callie's case, a criminal.In her vision, she sees herself murdering her gifted younger sister. Before she can process what it means, Callie is arrested and placed in Limbo―a hellish prison for those destined to break the law. With the help of her childhood crush, Logan, a boy she hasn’t spoken to in five years, she escapes.But on the run from her future, as well as the government, Callie sets in motion a chain of events that she hopes will change her fate. If not, she must figure out how to protect her sister from the biggest threat of all—Callie, herself.

Seventeen-year-old Callie is about to learn her future. In this world, when you turn seventeen, you are given a future memory. You can learn if you are going to be a gifted musician, a champion swimmer and even if your are going to be a criminal.

Callie is expecting to learn she is going to be a Master Chef. She loves to cook and that would be a fantastic future. However, this is not what she sees. What her future holds is her worst nightmare. Running away and hiding sounds like a good plan but maybe turning herself in to the authorities would be better for everyone.

Just one person stands in her way...Logan. Logan is the boy she used to have a crush on until five years ago when he stopped talking to her. Now, he's there for her and he wants to help her. By helping her, he reveals his and his family's secrets placing himself in danger.

Callie tries to fight her future but when her sister is taken, she knows she must act. It doesn't matter that she might end up being where she's terrified to be... in close proximity to her sister again.

I was excited to read this book. The premise of learning your future and deciding to fulfill it or change it is intriguing to me. Callie knew her memory shouldn't become real and she tried to fight it the best way she could. But, how much does fate play a part in our decisions?

If anything this book left me with too many questions. Yes, I want to know what happens to Callie, but, I'm wondering if her dad is out there,  If Angela is going to change her mind, if Callie has more powers than she realizes, if two receivers can learn to communicate?

I'm looking forward to the next book  in the series. Bring it on!