The Striker by Monica McCarty 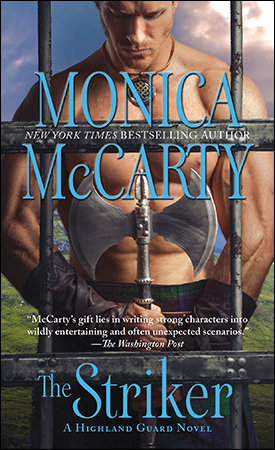 Six years ago, Eoin "Striker” MacLean endured the greatest betrayal of his life, a disaster that led Robert the Bruce to a crushing defeat and left Eoin without the spirited woman who ruled his heart. Eoin knew that falling in love with his sworn enemy’s daughter was risky, dividing him between a possessive desire for beautiful Margaret MacDowell and an undying loyalty to his king. He promised Bruce that he would keep his fiery bride in the dark about the elite Highland Guard, but he could not predict the dire consequences his secret would have on his young marriage. Nor could he foresee how surrendering to temptation could cripple Bruce’s cause, forcing Eoin to blame his wife—and himself for trusting her.


Now, as Bruce prepares to challenge the resistance’s remaining strongholds, Eoin finally has his chance for revenge against the woman he once loved so fiercely and her entire clan. But when ferociously independent Margaret reveals a surprise that unites her with Eoin, neither of them will let their love go down without a fight.

I have always loved Highlander books and The Striker was everything I hoped it would be.

The book is set after William Wallace is killed. There is turmoil in Scotland and in the middle of this is where our main characters meet and fall in love.

I will divide this book into two parts. The first part shows us how Eoin and Margaret meet.
Eoin "Striker" MacLean's goal is to become part of the elite group the Highland Guard. This is a secret guard created by King Robert the Bruce.  Eoin is all about strategy and he fights for what he believes to be right.

Margaret MacDowell is the only daughter of Dugald MacDowell. She is a carefree spirit. She does what she wants and she's happy that way. These two characters couldn't be more different, but they say opposite attracts. The more Eoin is in contact with Margaret, the harder it's to fight his attraction for her, regardless of how being with her will upset his plans.

Margaret's character was easy to like. She was happy and smart. She liked to push the limits. She was able to make brooding Eoin smile. I hated how Eoin's family mistreated her and their behavior was hateful.

The second part of the book happens after six years have gone by. This is the chance for Eoin to act on his revenge towards Margaret and her family. Yet, this becomes their second chance to be together. They just have to stay away from past mistakes.

It was easy to enjoy this book. I felt like I was right there with them, living their lives and tribulations. This wasn't an easy time in Scotland. It was a time of danger and uncertainty. Getting the rightful king to rule was the priority.  I believed Monica McCarty did an amazing job at portraying it.