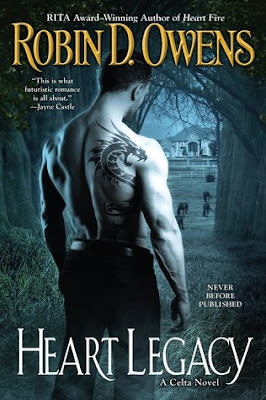 The award-winning author returns to her “wonderfully imaginative”* world of Heart Fire and Heart Fortune for an all-new Celta novel about a young woman’s destiny, and the one man whose love could be her downfall.

After the death of GrandLord Yew years ago, the Yews withdrew to their self-sustaining estate and disappeared from Celtan society. The current head of the household is believed to be eighteen-year-old Loridana. To find out, Draeg Blackthorn has been sent to the estate to spy, undercover as a stableman for the stridebeasts—beautiful creatures that hold a place in Lori’s heart no member of her family ever could.


Bullied by her family, Lori has decided to abandon her bloodline and live on her own with her true family—her animals. When Draeg discovers she’s rejecting her heritage, he’s appalled. He’s come to love the land as much as the woman, even spinning small fantasies of marrying Lori and becoming Lord and Lady of the manor. Draeg wants her to stay and fight her elders. For Lori, it’s an alternative that could render her absolutely powerless to pursue her own destiny, and drive her further away from her perfect dreams and the man she loves, Draeg.

Loridana is eighteen and she's waiting to become the next Yew to rule over her estate. However, her family makes her feel like she's still a child and she can't help feel like they dislike her. The one time Lori is happy is when she's around her animals, her cat, her horses, and stridebeasts. Her future plans include leaving her family behind and taking her animals with her.

Draeg Betony-Blackthorn's new mission is to infiltrate Lori's estate as a stableman. Someone is hurting children and Lori is the prime suspect. After a few interactions with Lori, he realizes she's innocent and if anything, she needs protection from her own family. He vows to keep her safe and in the process falls for her. But, Lori is determined to leave and Draeg can't follow her....

This is my first book in the series and I have to admit I felt a little lost at times with the story. This world was all new to me and I struggled to keep some of the secondary characters straight. Despite this, I was able to enjoy the interaction between Lori and Draeg. Although, they had very different backgrounds, they had a lot in common and it was easy to see why they fell in love. I particularly like how much they cared for their animals. The talking cat Baccat sure kept things interesting.