The Harder You Fall by Gena Showalter 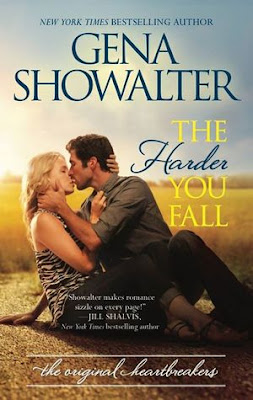 Millionaire video-game creator Lincoln West has a dark and tragic past. The sought-after bachelor lives by a rigid schedule and a single rule—one relationship per year, lasting no more than two months. No exceptions. He moved to small town Strawberry Valley, Oklahoma, with his brothers-by-circumstance hoping to escape the worst of his memories—until a brash beauty dredges up long-buried emotions.

A reformed party girl, Jessie Kay Dillon is determined to walk the straight and narrow. But her love-hate sizzle with West is just too irresistible. They can't be near each other without tearing off their clothes, but the last thing she needs is to be his next two-month dump. Can she be the one exception? Because as any former girl-gone-wild knows: rules are made to be broken.

The Harder You Fall is the third book in the series.

Jessie Kay and Lincoln West can't tolerate each other or maybe that's what they want their friends to think.

Jessie Kay is spontaneous, crude at times but she loves her sister and she would do anything for her. She feels guilty about the loss of her parents and she used to deal with it by partying too much. She has made a promise to herself, the next man she sleeps with will care for her. No more one night stands. The next one will want Forever with her.

"I see... heartbreak waiting to happen."

Lincoln West is rich, powerful and smart. He moved to the small town because he felt like he owe his friend Jase, and since Jase wanted to move there, both he and Beck followed. He used to hate the idea of the small town life but now, it feels like home. Like Jessie Kay, Lincoln knows about guilt since his friend went to prison for him. He also knows about loss and promises. He only indulges in a romantic relationship for two months out of the year and he has decided Jessie is the one. But, she has a different plan....

I loved this story. Both Jessie Kay and West were so damaged and it was great seeing each helping the other heal.
I wasn't sure I liked Jessie Kay because of the way she behaved in the first book but she has matured and she wanted something more in life. She has accepted her flaws, but she won't settle for less this time.
Even though, West could be in real life a little OCD and stalkerish, in Harder You Fall, he was completely endearing.

"You have the face I dream about and the smile I crave."

I hope there are more books in this series with Daniel being next.

"You and me, Jessie Kay. Indefinitely."