Seven Nights To Surrender (Art of Passion #1)
by Jeanette Grey 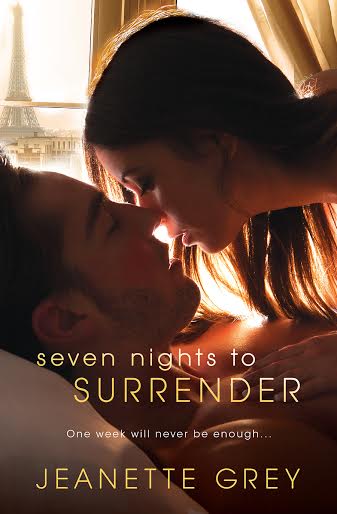 Kate arrives in Paris hoping to find inspiration. Instead she finds Rylan. In a swirl of stolen kisses and hot, tangled sheets, Kate is quickly swept away by the sexy stranger, longing to surrender to his expert touch. With Rylan, nothing is forbidden-except the truth.

An American ex-pat worth millions, Rylan never flaunts his fortune. Rather, he guards his identity from everyone, especially women. No strings, no commitments, no complications. But the second his lips taste Kate's soft, sweet skin, everything changes. For the first time, Rylan has found someone to share his every want and need. Yet he knows that secrets stand between them. To keep her, he'll need to confess the truth before it's too late . . . even if doing so could mean losing Kate forever.

Kate stayed firmly planted in her seat as he offered to help her up. Trying her best to appear unaffected, she arched one eyebrow. "Does this usually work for you?"
The guy didn't pull his hand back or in any other way appear to alter his strategy, and Kate had to give him points for that. "Yes, actually."
"Interesting."
The sad truth was, his offer was beyond tempting. The attention was nice, especially after her self-esteem had been beaten down the way it had in the past year. Hell, in the past twenty-two. It wouldn't hurt to have someone who spoke fluent French showing her around, either. That he was as attractive as he was just made the deal sweeter.
"Not working so well on you, then?" he asked as she considered him.
"Not so far."
His smile only widened. "Good. I like a girl who's hard to crack." Standing up straighter, he held his palms out at his sides. "Come on, what have you got to lose?"
"I'd say my wallet, but that's already gone."
"See? Low stakes. Listen, you don't trust me." That was an understatement. Was there a man left on Earth that she did? "I don't blame you. Devilishly handsome man wanders into a café and buys you a drink without asking? Offers to show you around town? Very suspicious."
"Very."
"So let's make this safe. You said you wanted to see the Louvre? Let's go to the Louvre. I'll show you all my favorites, and then if I haven't murdered you by supper time, you let me take you someplace special. Someplace no guide book in the world would ever recommend."
She was really running out of reasons to say no. It was a good plan, this one. They'd be in a public place. She'd have time to feel him out a little more. And if he wasn't too much of a psycho, well, everyone had to eat, didn't they?
Still, she kept up her air of skepticism. She rather liked all his efforts to convince her. "I don't even know your name."
The way his dimples shone when he lifted up one corner of his mouth was completely unfair. Extending his hand again, he offered, "Rylan. Pleased to make your acquaintance."
Rylan. That was unusual. She liked it.
"Kate," she volunteered in return, and with no more real excuse not to, she accepted the handshake, slipping her palm into his. Warm fingers curled around hers, his thumb stroking the side of her hand, and oh. The rake. He bent forward as he tugged on her hand, twisting ever so slightly so he could press his lips to the back of her palm.
"Charmed."
"I'll bet you are." But her pulse was racing faster, and the kiss felt like it seared all the way to her spine.
This man was dangerous.
He straightened up but he didn't let go. Sweeping his other arm toward the door, he asked, "So?"
She hummed to herself as she gazed up at him, as if there was any question of what she was going to do. His blue eyes sparkled, like he already knew her answer, too.
"Well." She rose from her seat, feeling taller than usual. More powerful. Maybe it was all the flattery of a guy like this hitting on her. Maybe it was the headiness of making this kind of a decision. Either way, it made her straighten her shoulders and insert a little sway into the movement of her hips.
"Well?"
"Lead on," she said.
He didn't let go of her hand. "That's what I was hoping you'd say." With a squeeze of her fingers, he took a step toward the door. "Let's go look at some art."
External pressures aside, she had come to Paris to be inspired by beauty. She could find it on the walls of a famous museum. And she could find it in the lines of this man's shoulders and throat. The latter might not have been what she'd had in mind when she'd set out, but what was a little bit of a diversion?
You couldn't find yourself without taking a couple of side trips, after all.

Kate is in Paris, alone, and trying to find herself. She's an artist and is using this trip to get some inspiration, as well as trying to make some big decisions in her life. Having a bit of wanderlust in my blood, I can say that I understand her need to get away from home and clear her head, and heart.

She meets Rylan in a cafe when he comes to her rescue and pays for her drink when she is mugged while waiting in line in said cafe. He buys her drink and offers his services as a tour guide as well. Reluctantly and throwing caution out the window she accepts his offer. Rylan is charming, funny, and very very sexy. Kate can't help but be charmed by him even though she tries her hardest not to let it show. Somehow these strangers connect and end up spending the week getting to know each other and themselves. Rylan is running from the inevitable and it's soon to catch up with whether he likes it or not. As the week passes Rylan and Kate both come to some startling realizations.

I love all of the sites throughout Paris that are included in this story. I could envision things in my mind's eye and felt like I was there enjoying it in person. I like how Rylan was able to get Kate to open up even if he wasn't being completely forthcoming about himself.

This is very well written story with lots of sensual sexy time! I am looking forward to reading the sequel to see how Kate and Rylan's story ends.

3.5/5 Fangs
A complimentary copy was provided in exchange for an honest review.

Kate has the romantic notion that running to Paris for a week will help her find herself. She has an intense passion for art but still hasn’t discovered her personal style.  She thinks being alone to work in the most beautiful place will help with that.

Rylan is just as lost as Kate. He's running from his past with no intention of facing it.

When Kate and Rylan meet they have an intense connection that leads to a week discovering each other.  But will the past Rylan tries so hard to forget catch up to him and ruin it all?
**
SEVEN NIGHTS TO SURRENDER was beautifully written, but I just didn’t feel connected to the story.  It was enjoyable but something was missing to me.  Kate’s reactions left me a bit puzzled at times.  Rylan honestly saved the book for me.  He was upfront with his intentions even though he was hiding a huge part of his life.

I will say that I’ll definitely have to pick up the next book because I have to know what happens. I’m hoping now that everything is out in the open the second part of their story will help me connect to them a bit better.

3/5 FANGS
**Complimentary copy provided by publisher in exchange for an honest review.

Jeanette Grey started out with degrees in physics and painting, which she dutifully applied to stunted careers in teaching, technical support, and advertising. When she isn't writing, Jeanette enjoys making pottery, playing board games, and spending time with her husband and her pet frog. She lives, loves, and writes in upstate New York.