Fighting for Devlin by Jessica Lemmon 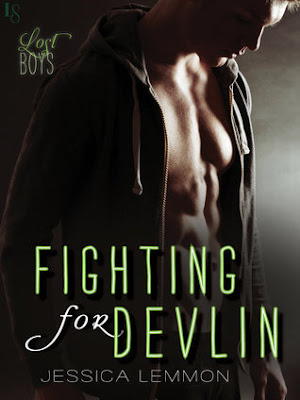 Devlin Calvary makes his own luck. Orphaned as a young child, he was taken in by a crew of bookies and gamblers—and they became his family. They’re the reason Dev’s running a trendy bistro, living in a high rise, and enjoying the good life with a string of women who never ask for too much. Until, one night, he finds out how much it hurts to trust the wrong people.

Rena Lewis sticks to the straight and narrow, determined not to slip up again . . . like the terrible night of partying four years ago that ended in tragedy. A waitress at Oak & Sage, she knows that sleeping with her boss is not a smart move. But when Dev shows up on her doorstep, beat up and clearly shaken, Rena’s not about to turn him down . . . or kick him out of bed.

Dev reawakens something primal within her—a need to go wild. And Rena soon finds out that the heart she’d sealed away years ago still has the power to fight for love.

Devlin Cavalry has it all. He's the manager of a well-known restaurant and his business is flourishing. So it's his side job. He works for a bookie and he uses his restaurant as a front to collect payments. Devlin only seems to care about three things: his restaurant, Paul, the man who took him in after his father's death and Sonny, the bookie. Yet, when Rena starts working for him, he can't seem to stay away from the good girl and his priorities start shifting.

Rena Lewis knows how hard it is to lose someone you love. The experience left her emotionally unavailable. She hasn't felt anything remotely to attraction to another man until she meets her boss. Soon, he's all she can think about. She likes him, wants him but she doesn't know if she can trust him.

I had some issues with the story. I didn't like how Devlin used Rena. In my opinion, he grew a conscious a little too late for my taste.
In regards to Rena,  I thought she fell in love with Devlin way too soon. There was not a lot of character development. I wanted to see a little more of a connection between the two main characters besides their lust for each other.
Despite my problems with the book, I still enjoyed the story.