Searching for You by Jennifer Probst 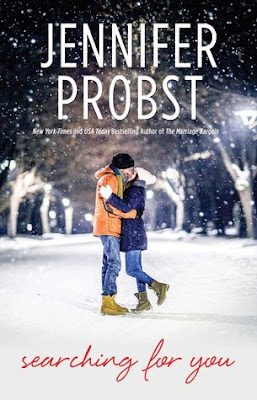 When a high-powered CEO and a playboy billionaire get stranded in a snowstorm, sparks will fly…if they can make it through the night together! This sexy enovella from Jennifer Probst’s heartwarming Searching For series—originally published in the sizzling anthology Baby, It’s Cold Outside—depicts an encounter almost too hot to handle.


Successful and determined executive Riley Fox has everything a modern woman could want…except for the love of her life. But she didn’t get to the top of her field without setting stringent expectations, and when it comes to finding a partner, she’s leaving nothing up to chance. Until her car breaks down in a blizzard, trapping her with the one man she’s always loathed and secretly crushed on: wealthy womanizer Dylan McCray.

Tired of his reputation as a ladies’ man, Dylan longs for a serious relationship with the woman of his dreams. Countless casual dates and hook-ups have left him with no idea what that gut-clenching moment of rightness feels like…until he rescues the stunning woman who has always tempted his fantasies. Will these staunch opposites repel rather than attract, or will sunrise bring everlasting romance after a steamy night in the snowy mountains?

Riley Fox is ready to settle down and get married. She has joined her friend's Kinnections as their new customer and Kate has set her up on a blind date. She only knows his first name and she's on her way to meet him when a blizzard interferes. Next thing she knows, she's in Dylan's house. Dylan is the man she met in college and shared one hot kiss with. She knows he's nothing but danger to her plans. He doesn't fit in the box she has made up for the perfect man.

Dylan McCray has been a customer of Kinnections for about two years. He has tried to find the one, but all his dates end up without a second one. He might be a billionaire and has a womanizer reputation but, he has worked hard for what he has accomplished. Riley is the one he let go, but now he's mature and he knows she's the only one for him. He just needs to modify the "box" she has made up to include him.

I loved all Jennifer's books and this novella had everything I liked about her writing. It was sweet, romantic and endearing. A perfect snow day romance.  Both characters were strong, determined and hot together. They have gained their success by hard work which was one more thing they had in common. They have thought about each other during the years apart and they are not going to waste any more time.

"It's you. I've been searching for you."