The Scionless House by Nazarea Andrews 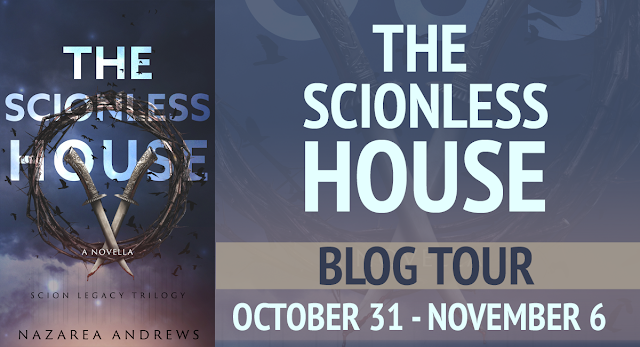 THE SCIONLESS HOUSE (The Scion Legacy, #.5)

Twelve Houses. Twelve vampire lines. We ruled from the shadows, and manipulated the world, and when humans came too close to destruction, we intervened.
Every House has a Scion. A fragile, easily broken human that stood shoulder to shoulder with the house Princes and Princesses.
Except for ours. The Ravens, House Cantelie.
We've been without a Scion for almost fifteen years.
But that will change...and her life will be mine to protect.

I usually have a hard time getting into novellas, but that I was not the case with this novella. I was surprised with how much I enjoyed it. I thought the world was unique and interesting. I definitely want to learn more about it. Some of the characters and their relationships with each other was a little hard to keep up with, so I wish that would have been explained a little bit better. At times, I felt like I was drowning in information overload, but I understood that the author had to give a lot of information in a short amount of time. I felt like I was diving into a full length story, and not a short novella. I kept forgetting that the novella was going to end soon. I never wanted it to end! I was intrigued to learn more about what was going to happen. I am now very excited to read the next book that picks up where this novella left off. I thought this was a great introduction into the book series, and I am excited to see how this storyline will progress in a full-length novel.

4 / 5 Fangs*This ebook was given to me in exchange for a honest review. *

The TV is on in the corner as I emerge from my bedroom, and I frown. “Turn it up.”
Elise makes an aggravated noise as she reaches for the remote. She’s painting her nails, the fumes making my nose wrinkle as I pour the coffee—thank God, I did set it last night.
A classically good looking man in his mid-forties is addressing a crowd of reporters, all of them hanging on his every word.
“The atrocities won’t stand. We need to remember that we were dying when the Houses stepped forward with the antidote to the #plague name# and restored order. The fealty given to their lines and Scions are not only appropriate, it is their right.”
I glance at Elise, scanning her tablet as the blood red polish dries. “What happened?”
“HR0 bombed a coven.”
My blood runs cold and I swallow hard to keep from rubbing away the goosebumps running down my arm.
The human rights movements terrify me. Not because I disagree with them. I don't. I agree too much. It's terrifying because the Houses don't tolerate any dissent. Some will accept the rumblings od rhe movement, as long as it stays only that.
But no House will tolerate humans attacking the covens. And--"Where did it happen?"
Elise glances up at me, her pale eyes haunted. "Seattle."
Fuck.
The west coast belongs to House Klinge. And they are savage. Blood will spill tonight, and wash Seattle's streets red. I wonder how many will die to appease the fury of the House before the patriarch brings his princes to heel.
Hundreds.
"Go," Elise says abruptly. "You can't fix everything and the HRO knew the risks. We all do."
I nod, and grab my coffee, heading into the shower as the Kennedy scion drones on.
We all know the risk of crossing one of the Houses. But some are desperate enough that they no longer care. 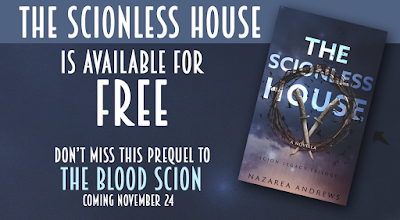 THE FIRST FULL-LENGTH NOVEL IN THIS SERIES -- COMING IN NOVEMBER!

I was just a reporter, trying to stay ahead of my student loans. I knew the rules, and I followed them.I thought I knew how the world worked—humans lived their petty little lives in the safety of the sun. We loved and fought and—when the sun sank—we scurried behind our walls and lived in fear. That is when the monsters came out to play. And even in the safety of the sun, we knew who ruled us. The Houses. And their Scions. Everyone knows the great Houses and their Scions—they are feared and loved and hated and envied. They are the gods who walk the shadows and rule all of our lives. They are salvation and death. And somehow, I am one of them.

SIGN UP FOR NAZAREA'S NEWSLETTER TO HEAR MORE ABOUT THIS NOVEL.

Nazarea Andrews (N to almost everyone) is an avid reader and tends to write the stories she wants to read. Which means she writes everything from zombies and dystopia to contemporary love stories. When not writing, she can most often be found driving her kids to practice and burning dinner while she reads, or binging watching TV shows on Netflix. N loves chocolate, wine, and coffee almost as much as she loves books, but not quite as much as she loves her kids. She lives in south Georgia with her husband, daughters, spoiled cat and overgrown dog. She is the author of World Without End series, Neverland Found, Edge of the Falls, and The University of Branton Series. Stop by her twitter (@NazareaAndrews) and tell her what fantastic book she should read next.