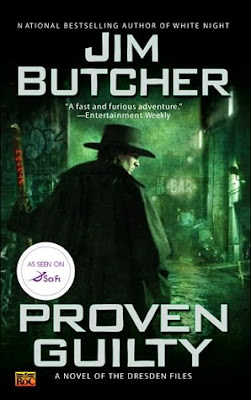 There's no love lost between Harry Dresden, the only wizard in the Chicago phone book, and the White Council of Wizards, who find him brash and undisciplined. But war with the vampires has thinned their ranks, so the Council has drafted Harry as a Warden and assigned him to look into rumors of black magic in the Windy City.As Harry adjusts to his new role, another problem arrives in the form of the tattooed and pierced daughter of an old friend, all grown-up and already in trouble. Her boyfriend is the only suspect in what looks like a supernatural assault straight out of a horror film. Malevolent entities that feed on fear are loose in Chicago, but it's all in a day's work for a wizard, his faithful dog, and a talking skull named Bob....

This is my favorite book of the series so far.
As soon as I started Proven Guilty I knew it was going to be a good book. It had the perfect combination of drama, awesome fighting scenes, humor and by the end of it, a sense of understanding.
Jim Butcher has made me love Dresden. I know he can be too sarcastic at times, but I just go with it. I was glad Michael was back in the picture. I have missed him.
Molly was a surprise in a way. I knew she was going to play a big part in Harry's life, but I could have never had guessed how much!
I wonder how old Harry is in this book. Is he in his early or late twenties?
I had a mini heart attack with Mouse. I almost stopped the book.....
Poor Harry is getting into more politics with the White Council, Winter and the Summer queens, but he's also making more allies, which he's going to need if Michael is right.
Thomas was excellent in this book. I hope he's able to be with Justina at some point.
One thing I'm sure of, it's I know who Harry has to give the sword to. I have no doubts.
I missed Butters... I hope he's in the next book.