Spotlight Tour
Making Your Mind Up by Jill Mansell 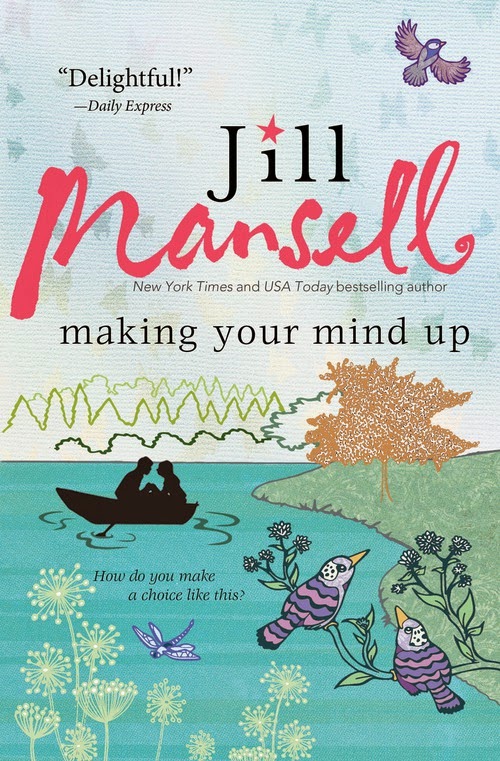 Love is a complicated thing…
Lottie Carlyle is happy enough. Living in a beautiful cottage with her two adorable—sometimes—kids in an idyllic village, on good terms with her ex-husband, and with friends all around, everything is going just fine. But when she meets her new boss, her peaceful world is thrown into delightful, exciting, and frustrating chaos. Tyler is perfect for Lottie, but her kids do not agree. To make matters worse, the handsome and mysterious Seb appears on the scene, intriguing—and distracting—Lottie and charming her children, making it more and more difficult for her to make up her mind…

“Very nicely done… Jill Mansell’s chorus of sharp-witted youth, shaking sticks at the foibles of their elders, is delightful.” —Daily Express
“A smashing read that both delights and surprises the reader.” —The Sun

Praise for Thinking of You:
“Mansell is like a Michelin-rated chef: She may use common ingredients, but under her sure hand the results are deliciously superior.” —Kirkus
“Humorous, sometimes poignant... Her breezy style resembles that of Sophie Kinsella or Helen Fielding… readers will be delighted.” —Booklist
“Jill Mansell combines, humor, friendship, romance and betrayal... keeps you wanting more.” —Fresh Fiction
“Beyond the fun, faulted characters, Mansell has a gift for humorous and witty dialogue that will leave readers in stitches... Mansell excels at creating relationships that are dynamic and complicated.” —Savvy Verse and Wit


There clearly wasn’t much call for city suits here in Hestacombe. As they turned to leave, Tyler glanced back at the lake, where iridescent dragonflies were darting over the surface of the water and a family of ducks had just swum into view. Casually he said,

Lottie Carlyle's first meeting with her new boss is not what she had envisioned. She is in a bikini and someone has stolen her clothes. As first impressions go, this was sure to make hers unforgettable especially when she accuses him of stealing her clothes.

Tyler Klein just bought a new business. His parents used to vacation there and when the opportunity to purchased it presented, moving from New York to start all over sounded like a good plan. His life in banking and stocks is over.  A new page begins and the more he gets to know Lottie the more he wants to be with her. Too bad her children hate him.

The beginning of this book was funny and entertaining. I found myself falling for Tyler pretty early on. He was sweet, responsible, funny and a true nice guy, who wanted to get to know Lottie better but unfortunately due to her children, found himself alone for too long.
I didn't like Sebastian. He felt too immature for me. He behaved mostly like a child instead of a grown up.
Lottie, I like her. She was straight forward. She was a true friend to Freddie. What I didn't like was letting her children decide her love life.
Her ex-husband Mario was funny. I like that they have a good relationship. He was a good dad. His love life was a mess but I was glad with where it ended.
Lottie's best friend Cressida was super nice and I was happy she found her own HEA. She certainly deserved it.

About the Author
With over 9 million copies sold, New York Times and USA Today bestselling author Jill Mansell writes irresistible and funny romantic tales for women in the tradition of Marian Keyes and Sophie Kinsella. She worked for many years at the Burden Neurological Hospital, Bristol, and now writes full time. She lives with her partner and their children in Bristol, England.