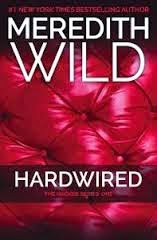 Every time I visited Barnes and Noble I would see THE HACKER series by Meredith Wild sitting nicely on the shelf.  The vibrant covers calling to me to buy them, but for some reason I never picked them up.  When Grand Central announced they were picking up the series to publish I knew I had to read them very soon.  The reviews I’d seen were fantastic so why wait any longer?

I read HARDWIRED in one sitting.  It was captivating and so well written.  The story starts off with Erica just graduating from Harvard and struggling to get her fashion social media site off the ground.  When she meets a possible investor her luck slowly begins to turn around and gets more complicated all at once.

Blake Landon, alpha male, billionaire, and rumored hacker, wants one thing: Erica.  He basically stops at nothing to get her to go out with him.  As Blake and Erica’s relationship progresses they begin learning about each other’s dark pasts.  Will Erica be able to let go of some of the control and allow Blake to take the reins?

“You can’t tell me who to have in my life.  You said you weren’t interested in dominating me that way.”

“I never said that, and secondly, this is different.”

“Great.”  I shivered, chilled by the idea that deep down Blake really wanted to, maybe needed to, control me—an expectation that seemed to root itself further into our relationship with every passing second.

“Stop what?  I’ve never had to answer to anyone, and I’m sure as hell not answering to you.  So stick that in your f***ing dominant pipe and smoke it.”

I really enjoyed HARDWIRED.  The story was so well written and the characters were extremely developed.  Blake and Erica had amazing chemistry that burned off the pages.  I am so excited to continue to read this story to see where their relationship goes.  There are also a few other storylines I’m so curious about.  I can’t wait to jump into book two!!!

Posted by MrsAlcide at 8:41 AM