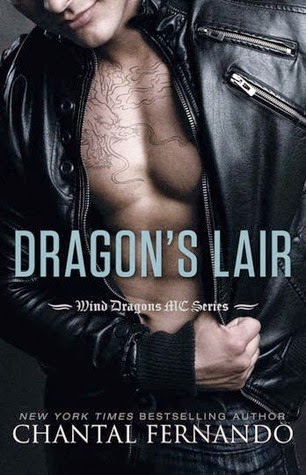 “Fernando’s launch of her Wind Dragons Motorcycle Club Series is plenty steamy. For fans of Kristin Ashley, Julie Ann Walker, and Joanna Wylde, and those who are heartbroken that television’s Sons of Anarchy has ended.” -Booklist

DRAGON’S LAIR was such a pleasant surprise! I decided to read this book only knowing a few basic details. I knew it was about a motorcycle club and a woman that was in law school.  MC and good girl? YES PLEASE!

So basically DRAGON’S LAIR is about Faye and Dex.  Faye walks in on Eric, her boyfriend of several years, with another woman.  After a week of being upset she decides to go out for the night.  As she’s leaving the bar she sees Dex for the first time in years.

Long, spoiler-free-story short, she ends up pregnant.  Dex makes Faye move into the clubhouse with him so he can take care of her.  Oh yeah, and did I mention Dex and Eric are brothers?

This book had it all.  Feisty heroine? CHECK. All the feels? CHECK! Funny conversations? Check.  Hot alpha males? DOUBLE CHECK.

Faye honestly made the story for me.  She was hilarious and so determined to provide a good life for her unborn baby.  She made all the brothers love her no matter how crazy she was.  I mean, how could you not love her when she references Harry Potter and Sons of Anarchy?

“Fine but I don’t care who offers you hospitality with their women, you say no.  There is no what happens on the road stays on the road with us.”  I let my expression tell him how serious I am about this.

“Have you been watching Sons of Anarchy again?” he asks, body shaking with laughter.  Jerk.

Dex and Faye’s relationship was a slow, constant build.  Through the tough exterior, Dex was a sweet and sincere man.  He protected and cared for Faye in ways I didn’t expect.  The tough MC Vice President had me swooning!

He peppers kisses all over my face. “It’s like. . . I breathe you babe.  There is no other way to explain it.”

DRAGON’S LAIR is a story I won’t soon forget.  I’m so excited to read the next book in this series!

Faye's life spiraled to crazy when she catches her boyfriend cheating on her. She is a law student and is throwing herself into her studies it is the only way she can cope with his betrayal . One night she meets Dex outside a bar. Dex is her ex-boyfriend's brother and her secret crush from childhood.  A one night stand sounds good but throwing caution  to the wind will complicate her life in a big way.

Dexter Black is the vice president of the Wind Dragons MC. He was Faye’s neighbor growing up and even though he was five years older than her he had a soft spot for her. When he sees her as an adult he knows he wants her. Bringing her into his world is unavoidable.
It's hard for them to reconcile their different lifestyles but they both know it may be worth it.
~~
I really enjoyed rereading this book. I love MC books and Chantal Fernando did a perfect job creating this MC world.

I liked both main characters. Faye made me laugh more than once.  She was smart, sassy and funny.

Dex was not your typical MC guy. For the most part I thought he was sweet. Yes, he could be a badass when he wanted to be but he was always nice to Faye. He was protective and he was there when Faye needed him.

I also liked all the other MC guys especially Tracker and Arrow.

“I breathe you babe.”

4/5 Fangs
A complimentary copy was provided by the publisher via NetGalley in exchange for an honest review.
Posted by MrsAlcide at 9:30 AM