Blog Tour
Zeke (The Powers That Be #2) by Harper Bentley 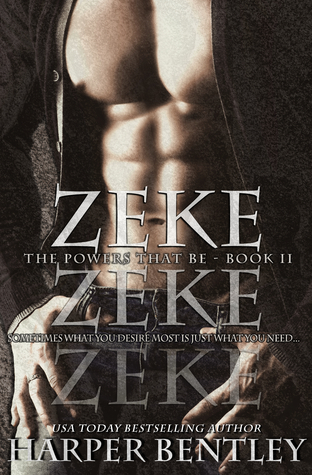 And he was a bad boy through and through.

The things he said to me had me blushing and my toes curling.

But he was someone I totally didn’t need walking into my life, screwing up the plans I’d made and turning my world upside down.

Although I’d been living a no-frills, no-fun existence, I felt it was necessary to get where I was going. Keep your eye on the prize and all that.

But Zeke was determined to prove to me that what I desired most—him—was just what I needed.


New adult. Not recommended for readers under 17.

Gable Powers had all the makings of everything my father had ever warned me about: a reputation that was anything but stellar, a dirty mouth that had me shivering at the things he uttered in my ear, and a body (oh, God, that body) that was covered in tattoos, all of which added up to a solid ten-point-oh on the bad-boy scale.

The first time I met him, I instantly loathed him.

The second time was even worse.

He was nothing I thought I ever wanted.

So why couldn’t I resist him?

New adult. Not recommended for readers under 17.

Harper Bentley has taught high school English for 22 years. Although she’s managed to maintain her sanity regardless of her career choice, jumping into the world of publishing her own books goes to show that she might be closer to the ledge than was previously thought.

After traveling the nation in her younger years as a military brat, having lived in Alaska, Washington State and California, she now resides in Oklahoma with her teenage daughter, two dogs and one cat, happily writing stories that she hopes her readers will enjoy.