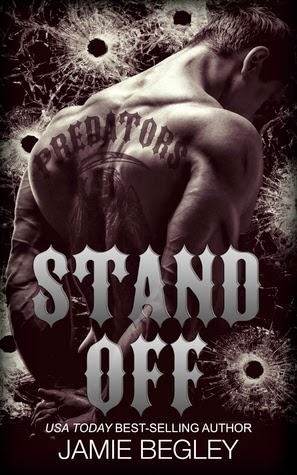 Casey Harris is determined to infiltrate the Predators and to bring them to justice. She believes her way in is through her stepbrother Max. She has been dating Jayce but she realizes she needs to break it off before she begins her plans with Max. Her deception has to appear real.

Max doesn’t understand his need to protect Casey. She is stuck up, rude and is nothing like her mother. When he finds out she is working late nights, he makes himself responsible for her safety.
Max’s love life is a mess. He has four children from four different women. It seems that after six months he gets tired of the relationship and they part still as friends.  Now, he wants Casey and it’s hard to turn down what she is offering.

“..don’t forget dessert.”
“For the kids or you?”
“Get the kids the chocolate cake. I already know what I’m having for dessert.”

But, what happens when he realizes the truth?

I say it again. I love Jamie Begley’s MC world. All her books have characters that cross over.

Max was great. He was no cheater. He would rather break things off as friends than betray someone. He always felt protective towards Casey, despite her continuously giving him the cold shoulder. He was also loyal to the club.

Casey was ready to sacrifice everything to achieve her goal. She was very smart and she was nice to Max’s kids. Her life has not been easy and I kind of knew what the big reveal was going to be.

As always, there are funny scenes too. Max's real name was awful, LOL.

“Are you sick?”
“No.” Jackal had been standing next to Ice. “Why?”
Penni shrugged. “You looked like you were going to puke.”
Max nudged Jackal with his elbow. “I told you not to smile.”

I do feel like the steamy scenes were lacking.

I hope Penni and Jackal come out soon.