Searching for Beautiful (Searching For #3)
by Jennifer Probst 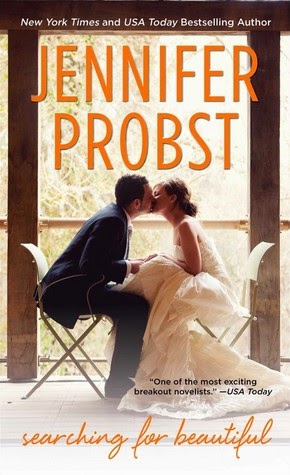 Genevieve MacKenzie is desperate. It is the day of her wedding and her inner voice is telling her to run. And run she does. She has not been happy with her fiancée
for a long time. He is abusive, not physically but mentally. He wants to shape her into something she’s not. When she jumps out of a window, her best friend Wolfe is there to catch her.

Wolfe is dreading Genevieve’s wedding. He knows she’s making a mistake. Wolfe has been worried about her for a while. To his shock,  while on a smoke break outside the church, he finds her sneaking out of a window of her own wedding. Wolfe is determined to  to protect her and he takes her away to Sawyer’s cabin for a few days until the smoke clears.

Here is where things get complicated. Lines between friendship and lovers get crossed and once they do nothing is the same.

Jennifer Probst makes me fall in love with her characters and their stories. This one was no different.

I love Wolfe. He was caring, loyal, he was a true friend and later on a great partner. He protected her when she needed someone to support her during a confusing time in her life.

I also thought Genevieve was very strong. It takes guts to leave an abuser and she did it just in time. She saved herself from years of unhappiness.

The connection Wolfe and Genevieve have was based in unconditional friendship. They had been there for each other for years. Their feelings have deepened over time and it has created a straight path to romance. An unbreakable bond.

Great addition to the Searching For Series.

A complimentary copy was provided by the publisher via NetGalley in exchange for an honest review.
Posted by MrsLeif at 9:00 AM