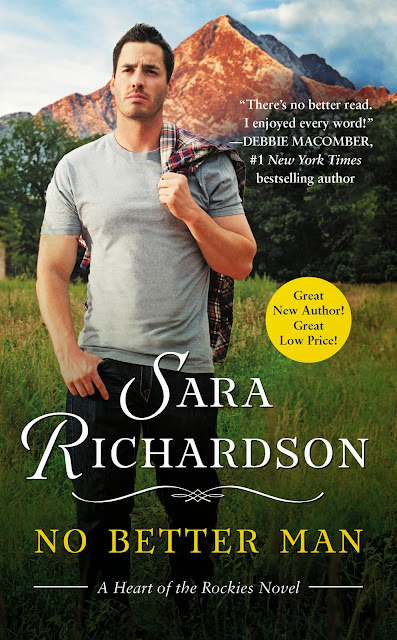 A Daring Proposition
When it comes to business, Avery King always comes out on top. So after a very public breakup, work is the perfect excuse to flee the Windy City for the gentle breezes of Aspen, Colorado. Her mission: acquire the land of a rundown mountain ranch. Avery expects an easy win . . . until she meets the rugged and irresistible rancher who won't give up his property without a fight. Bryce Walker is stunned by the stubborn beauty determined to get what she wants. But what she wants is his last connection to the life he used to have. Bryce has plans to return the ranch to its former glory and no way will he sell his family home. Yet the more time he spends with Avery, the more her sweet touch makes him forget his painful memories. Now Bryce must decide whether living in the past is worth losing his future . . .

Avery King is the heiress of Tycoon King Enterprises. Yet, Avery doesn't care much about her money. She cares about the Chicago Cubs and a simple life. She works for her dad and after a very public marriage proposal which she declines she moves to her next big work project. Her dad wants her to obtain the land where he and her mom where happy once. Avery knows she must do this. She has watched her dad suffer after loosing her mother. Whatever it takes she is determined to get the land for him.

Bryce Walker's last three years have been nothing but hell. His life spiraled down when he lost it all. Now, he is determined to save his ranch. It's what gives him purpose. He won't sell his land if he can avoid it.

When Avery meets Bryce, sparks begin to fly. They have a great chemistry. Bryce tried to stay away from the girl who made him feel again for the first time after so many years. Avery is able to break down his walls but she is unsure about his feelings. Bryce will need to convince her that he truly cares.

~
It was so much fun reading this book. Bryce is surrounded by great friends who are there to support him for whatever he needs them for.  Brooding Bryce was mysterious and I smile when he started to fall for Avery. I can almost imagine his smile. The ones that made Avery skip a heartbeat.
Avery got along with everyone. I liked her from the moment she was playing with his dog Moose. Despite growing up without a mother, she was down to earth and genuinely nice person.
I love Bryce's mom and her cooking. The brownies and cookies after the games make me want to be there to experience it myself.
I  can't wait for the next in the series after reading the little cameo at the end of the book.


Excerpt
Ah, hell. Not this. What was it with women, anyway? Why’d they have this burning desire to get to the bottom of absolutely every feeling they had? Why couldn’t they sit in silence, enjoy the scenery? “I don’t know you well enough to be upset with you,” he finally said, increasing his pressure on the gas pedal. The cops were notorious for pulling over speeders on this section through town, but tonight he was willing to risk it.
“Look.” Avery’s hands sliced the air in front of her. “I understand why you don’t want to sell. Trust me. I get it.”
Ha. Trust her. He didn’t trust her any more than he trusted her father. At the end of the day, she worked for the infamous Edward King. She might be smokin’ hot and nice, and, like she insisted, a good person, but she still had a job to do. He wouldn’t forget that.
Instead of answering, he leaned over and flicked on the radio. Nothing like a little Brad Paisley to tune out a woman.
Avery shot him a fiery look, topaz eyes blazing, lips thinned into a warning that tempted him to test her.
That didn’t help things. She looked even better when she got mad. His grip on the wheel tightened until his knuckles ached. Mom was right. He had to get out more. Start dating again. Any woman besides Avery King…
She hunched forward and fiddled with the radio until he could hardly hear Paisley. Fine. That was fine. Five more minutes and they’d be back at the ranch anyway. He’d be free of her.
“You need to listen to me, Bryce. Please.” She launched into yet another impassioned monologue about how selling the ranch could change his life.
Yeah, well. He’d had enough changes in his life over the last few years. So sue him if he wasn’t interested. She didn’t seem to pick up on his lack of concentration, though. She went on and on until he pulled the truck into the driveway and parked in front of the office.
“Are you listening to me?” She leaned over the console between them and got in his face, close enough that he could smell oranges, that he could trace the sexy curve of her upper lip with his tongue if he’d wanted to.
“Have you heard anything I’ve said?”
The throb started again, deep in his chest, invading his body until it occupied all of him.
“Seriously, Bryce this is—”
Screw it. He cupped his hand around the back of her head and roughly brought her lips to his, totally unprepared for the impact it would have. Shock waves coursed through him, unleashing a craving stronger than he’d ever felt.
Avery squeaked in surprise but he didn’t let up. Need thundered through him and it was a helluva lot louder than the logic he’d spent the last several hours beating into his thick skull. Her lips were soft and moist and everything he’d hungered for during the last three lonely years. He gentled a hand up into her hair. It felt like silk against his skin.
A small moan purred in her throat and her upper body relaxed, lips melding to his in a pulsating heat. She ran her hands up his chest, and that was all he needed. He bent forward, halfway over the console, gathering her closer, kissing her harder, deeper. If it wasn’t for that console, he’d pull her right into his lap…
“Wow. Just…wow,” she whispered against his lips.
He answered by parting her lips with his tongue. There. That’d take care of her chatting problem.
Avery gasped a sharp intake of air, her chest rising against his.
Taking it as an invitation, he commanded her with his lips, opening and closing them in a sensual rhythm. A dull ache resounded in his chest. God, he’d forgotten the depth of a kiss…
He shifted to get a better angle, more access, but that console…
She pulled back with a small smile, lips grazing his in a tease, then she pressed in again and proved that she could make out as well as she could talk.
A scratching sound scraped the window. Moose whined, then barked.
Great timing, as usual. 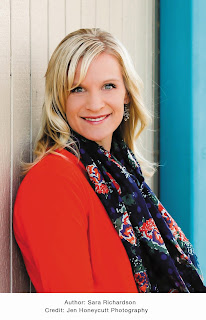 Sara Richardson grew up chasing adventure in Colorado's rugged mountains. She's climbed to the top of a 14,000-foot peak at midnight, swam through Class IV rapids, completed her wilderness first-aid certification, and spent seven days at a time tromping through the wilderness with a thirty-pound backpack strapped to her shoulders.
Eventually, Sara did the responsible thing and got an education in writing and journalism. After a brief stint in the corporate writing world, she stopped ignoring the voices in her head and started writing fiction. Now, she uses her experience as a mountain adventure guide to write stories that incorporate adventure with romance. Still indulging her adventurous spirit, Sara lives and plays in Colorado with her saint of a husband and two young sons.