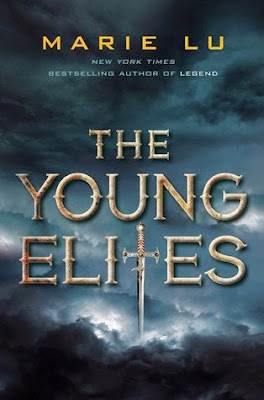 This book was another captivating and exciting novel by Marie Lu. This book had me hooked from the beginning, and I was addicted to the storyline of this book. The book was a dark book, and I found that to be very refreshing. The main character, Adelina was like a villain in this book. She was always trying to do the right thing, but it would typically back fire on her. She definitely had moments of extremely evilness, and those scenes made me cringe. However, for the most part, I think she was just misunderstood. Adelina was very comparable to Elsa from the movie "Frozen", and I thought that was really refreshing for a main character.

The characters that were in The Young Elite were all extremely fascinating in their own way. They were all complex and well written, and I found myself having multiple favorite characters in the book. I also really enjoyed the romance in this book. Enzo and Adelina had a lot of chemistry and their romance was extremely addictive. I actually would have liked to seen more romantic scenes between them, but the pace of the romance was really well developed.

Overall, this book was really enjoyable and it was a great fantasy novel. Marie Lu wrote a very complex world that was easy to understand and easy to get addicted to. The only confusing aspect of the book was the description of some of the powers that each character had. I think the most confusing power to image in my mind was Adeline's  It was very hard to really grasp what was happening whenever she was using her powers.

The ending killed me. I was not expecting that ending at all, and I had to put my book down for a while to really be able to comprehend what happened.

The epilogue was extremely promising, and I hope the new character that was introduced will be a main character in the sequel. The epilogue made me so excited for book two, and I cannot wait to get my hands on it.

Adelina Amouteru is a young girl who has been mistreated by her father and society after a fever left her face scarred forever. Children like her are called the Malfetto. They are considered evil and dangerous. Some of them have powers and the king and queen are trying to kill them all.

When Adelina’s father decides to sell her to pay debts, she runs away but later on she’s captured by the Inquisition.
In the nick of time she is saved by the Young Elites, a group of teenagers who suffered the same disease as hers but they have powers. She is rescued by Enzo Valenciano, the Crown Prince who teaches her about her own powers and starts her training.
Too bad Adeline is being forced to betrayed them…..

I don’t really know how to feel about this book.
Adelina is the villain in the story. I hated that despite her powers and darkness she was unable to “win” one. Wasn’t it enough that she had suffered under her cruel father’s tutelage? Her sister’s oblivion to her pain? that she was being used and blackmailed???
I wasn’t a happy camper. At the end of the book what I wanted to do was to throw my kindle to the wall and break it in tiny little pieces!

I’m going to read the rest of the books just because I need to know what happens but at this point I’m angry.