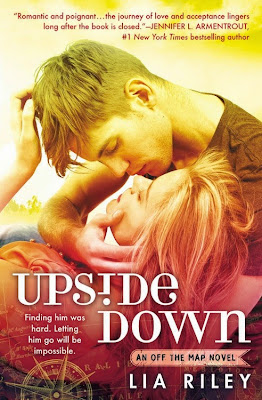 
UPSIDE DOWN by Lia Riley (May 12, 2015; Forever Trade Paperback; Off the Map #1)
If you never get lost, you'll never be found…Twenty-one-year-old Natalia Stolfi is saying good-bye to the past-and turning her life upside down with a trip to the land down under. For the next six months, she'll act like a carefree exchange student, not a girl sinking under the weight of painful memories. Everything is going according to plan until she meets a brooding surfer with hypnotic green eyes and the troubling ability to see straight through her act.

Bran Lockhart is having the worst year on record. After the girl of his dreams turned into a nightmare, he moved back home to Melbourne to piece his life together. Yet no amount of disappointment could blind him to the pretty California girl who gets past all his defenses. He's never wanted anyone the way he wants Talia. But when Bran gets a stark reminder of why he stopped believing in love, he and Talia must decide if what they have is once in a lifetime . . . or if they were meant to live a world apart. 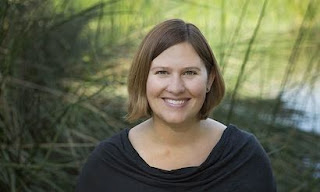 About the author:
After studying at the University of Montana-Missoula, Lia Riley scoured the world armed only with a backpack, overconfidence and a terrible sense of direction. When not torturing heroes (because c'mon, who doesn't love a good tortured hero?), Lia herds unruly chickens, camps, beach combs, daydreams about as-of-yet unwritten books, wades through a mile-high TBR pile and schemes yet another trip. She and her family live mostly in Northern California.

Excerpt:
“Is it true you have no regrets, not even one?” Hopefully he has no idea how dead serious I am in his response.
“There’s no point.” His fingers tighten infinitesimally on the wheel. “The past is the past. That’s it.”
“Like whatever doesn’t kill you makes you stronger?”
“No, that’s a dumb-ass cliché. I mean there’s no meaning to life, despite what people pretend. Once I figured that out, everything got easier.”
“Has anyone ever said you are intense?”
“Since the day I was born.” He checks the rearview mirror. “So I got to ask you something. Maybe I’m presuming but—”
“If that’s your lead-in, then you’re probably correct.”
“You don’t fool me.”
He’s right. No matter how hard I try to hide and pretend away my crazy, Bran sees too much.
“But you try to fool everyone, don’t you?” He turns and catches me staring. “With the act. You, all breezy, cute as hell, always smiling like we’re at some big-deal party. You know what I think—”
“No, actually.” Wait, I’m cute? He thinks I’m cute?
“Not sure what your issue is, but—”
“I’m fine,” I mutter tightly. Reality wanders back, as unwelcome as a drunk uncle at a family picnic. Let’s face it, no one wants to be around a girl with issues. “Really, I’m all good.” Right, I sound like a five-year-old watching worms die in puddles.

“Whatever you say, Miss OCD.” He glances from the open atlas on my lap to my pursed mouth with a thoughtful look.
“I…I…” Anxiety locks me in an invisible chokehold while my abdomen spasms. But Bran’s gaze isn’t mocking. There’s an unexpected sweetness there that’s coaxing me from my familiar fortification. “I guess maybe it’s something like that.” My whispered words rise above my head like a toxic balloon.
“Must kinda suck.”
People don’t kid if they think you’re crazy, right?
“Sucks donkey balls.”
He grins. “An unpleasant flavor.”
Suddenly I can breathe again. “And you’d know how?”
A second crawls past. He keeps his veiled eyes trained on the road.
“Bran?” Finally, I can’t take it. I need to say something. “You acting nice is unfamiliar, and, frankly, uncomfortable, territory.”
“Is being interested a crime?” He kneads the back of his neck. The deep, massaging rhythm is mesmerizing. His thumb is a little wide. He keeps his nails neatly cut.
“You’re interested?” I’m off-kilter, like I’ve taken back-to-back rides on the Tilt-A-Whirl at the boardwalk.
“In your quirks. Let’s hear another one.”
“One more. That’s it. Then we’re done for the day.” I kick off my flip-flops and cross my ankles. “I can’t fall asleep without reciting this long poem, Paul Revere’s Ride.”
How is this even possible? We’re talking about my most shameful secrets like it’s just another thing. Why isn’t he pointing a judgmental finger at me, crying, Shun her, shun the freak?
“And you call me kinky? What do your boyfriends say when they sleep over?”
“I repeat the words in my head, not out loud. And I’ve never had a boyfriend.”
“Wait, how is that even possible?”
“What? The no-boyfriend situation?” The words make me sound like a bigger loser when spoken aloud. There’s a very good reason. Too busy obsessing over my sister’s big love. But I don’t say that. Even in this sharing mood, some words strangle. Still, I’ve hinted at my blackest secret and wasn’t smote down, laughed at, or ridiculed.
A new song starts that’s all angsty and instrumental—dramatic violins, slow guitar riffs, and measured drumbeats. I don’t want to go dark, not right now, when everything almost glows.
I spy Bran’s iPod up on the dash and reach forward. “We need different music—”
“But we haven’t finished talking about— Wait! Hold up.” His hand darts but I’m quicker.
“What?” I dangle the iPod out of reach. “Cool guy like you have something to hide?
Maybe a secret Beyoncé playlist or…” I flick on the screen. “Oh to the Em Gee.”
“Go on.” He heaves an exaggerated sigh. “Don’t hold back.”
“Justin Bieber?”
“I watched my nieces yesterday. They have a dance recital to the song next week. I helped them practice their routine.”
“You? That’s so normal.” And sweet.
“Yep. I broke it down to the Biebs.”
“Please, tell me there’s a video.”
“I’m secure in my manhood, Captain.”

"Leaving is the only way to move forward.  If I never get lost.  I'll never be found."

Talia is twenty-one and spending six months in Australia as an exchange student.  She has painful memories that she’s trying to get over and secrets that are holding her back.  When she meets Bran and begins living she starts opening up about her past.

Bran has secrets of his own that he’s still devastated by.  He’s living the worst year of his life and when he meets Talia he starts living again.  Will their pasts ruin the good thing they have?

UPSIDE DOWN was a sweet story about finding love in chaos.  Before picking up this book I had no idea Talia suffered from OCD.  I was completely unaware of what people with this disorder go through daily.  While this is fiction, I feel like I got a small glimpse of someone living with this disorder.

I really did enjoy Bran.  His story broke my heart.  I’m so curious to see what happens with Bran and Talia in the next book.

Posted by MrsAlcide at 9:27 AM

Email ThisBlogThis!Share to TwitterShare to FacebookShare to Pinterest
Labels: Review Lia Riley, Off the Map novel, Upside Down