Across The Distance
by Marie Meyer 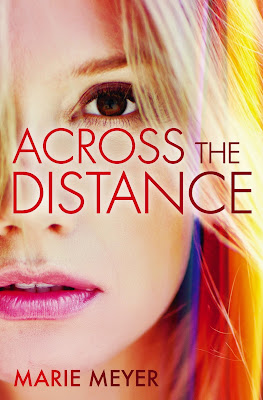 About ACROSS THE DISTANCE

There's a drawer I never open. It holds a picture I never look at. It reminds me of a day I hate to remember, but I'll never forget.I'd give anything to be like the other girls on campus. Going to parties, flirting with boys, planning for a future. But that's not me. And hasn't been since the day my parents died. The only thing that got me through was Griffin. Even though I didn't have my family, I always had him. Only, now I'm not so sure I do.

It's not just the eleven hundred miles separating us now that I'm at college. Or his band finally taking off, and all the gigs and girls suddenly demanding his time. It's as if everything is different-the way we talk, the way we text . . . the way he looks at me and the way those looks make me feel.

Griffin has been the only good thing in my life since that horrific day. But I can feel our friendship slipping away-and I'm terrified of what will be left in its place . . .

Marie Meyer was a Language Arts teacher for fourteen years. She spends her days in the classroom and her nights writing heartfelt new adult romances that will leave readers clamoring for more. She is a member of RWA and the St. Louis Writers Guild. Marie's short fiction won honorable mentions from the St. Louis Writers Guild in 2010 and 2011. She is a proud mommy and enjoys helping her oldest daughter train for the Special Olympics, making up silly stories with her youngest daughter, and bingeing on weeks of DVR'd television shows with her husband

Griffin took the last box from my hand and shoved it into the backseat of my car. “I’ll get my bike on the trailer, and then we’ll be ready to hit the road.” He wiped his upper arm across his sweaty forehead.

I looked into his dark eyes and smiled. “Thanks,” I sighed.

“For what?” With a toss of his head, he pushed a few errant curls out of his eyes.

“For putting up with me.” He could have easily gotten a plane ticket home, but he knew how much I hated airplanes. The thought of him getting on a plane made me physically ill.

He swung his arm around my neck, squeezing me with his strong arm. “Put up with you? I’d like to see you try and get rid of me.”

With my head trapped in his viselike grip and my face pressed to his chest, I couldn’t escape his intoxicating scent. Even though it was too hot for his beloved leather riding jacket, the faint smell still clung to him. That, coupled with the heady musk clinging to his sweat-dampened t-shirt, made my head swim with thoughts that were well beyond the realm of friendship.

I needed to refocus my thoughts, and I couldn’t do that pressed up against him. I shivered and pulled away. Taking a step back, I cleared my throat. “I’m going to tell Jennifer we’re leaving.” I thumbed toward the house.

He scrutinized my face for a minute, then smirked. “Enjoy that. You’ve earned it.”

I turned on my heel and let out a deep breath, trying desperately to rein in my inappropriate fantasies.

Months ago, our easygoing friendship had morphed into an awkward dance of fleeting glances, lingering touches, and an unspeakable amount of tension. I thought he’d felt it, too. The night of my high school graduation party, I went out on a limb and kissed him. When our lips met, every nerve ending in my body fired at once. Embers of lust burned deep inside me. I’d never felt anything like that before. The thought of being intimate with someone made me want to run to the nearest convent. But not with Griffin. When our bodies connected, I felt whole and alive in a way I’d never felt before.

Then he’d done what I’d least expected…he’d pushed me away. I’d searched his face for an explanation. He, more than anyone, knew what it had taken for me to put myself out there, and he’d pushed me away. Touting some bullshit about our timing being all wrong, that a long distance relationship wouldn’t work, he insisted that I was nothing more than his friend. His rejection hurt worse than any of the cuts I’d inflicted upon myself in past years. But, he was my best friend; I needed him far too much to have our relationship end badly and lose him forever. Regardless of his excuses, in retrospect, I was glad I wouldn’t fall victim to his usual love-’em-and-leave-’em pattern. Griffin was never with one girl for more than a couple of months; then he was on to the next. That would have killed me. So I picked up what was left of my pride, buried my feelings, and vowed not to blur the lines of our friendship again.
Posted by MrsAlcide at 9:09 AM