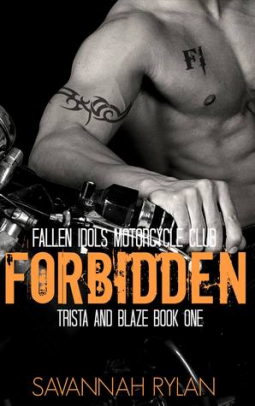 Forbidden has a twist.
Trista Monroe is a member of the Fallen Idols Motorcycle Club. At one time she was a prospect like all the other members. Her father is the President of the MC but she is not treated any differently. She has worked hard to be a member. She can handle a gun like anyone else. To her the MC is her family.

Blaze Taylor has come back to town to join the MC as their new prospect. His father was one of the original founders. When he died, Blaze's family moved away. His father died protecting the MC and Blaze will now vow to do the same.

The first time Blaze meets Trista they had one night of passion which neither could forget but when they realize they are part of the same club, their relationship is forbidden.

This is a short novella.
Trista behaves like a true MC member. She's not scared to protect what is hers. She can ride and can shoot like the next guy. I like that she is loyal to the club. She has great camaraderie with the other members too.
I like Blaze so far but I want to know more about him. I know there is a mystery surrounding his father's death. We're still missing details.
When Trista and Blaze met you could feel their passion. There was a sense of rightness.
I don't think their relationship will be a secret for too long.

Cliffhanger: It's a serial -so in a way yes.