Have you heard of the Rebel Writers? They call themselves a group of like-minded word nerds, but what they really are is a group of self-published and hybrid authors who have been busting their butts to put out some quality content over the last year. They are releasing their first compilation and giving you a FREE sneak peek into one of each of their books. 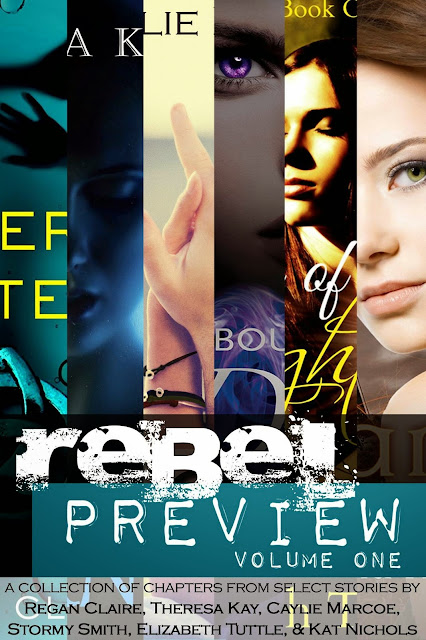 Description: This book is a compilation of chapters from the authors who make up The Rebel Writers. The excerpts are not full-length novels and are only intended to provide samples of multiple stories to expose you to new works. Included are contemporary romance, fantasy, science fiction, dystopian and paranormal stories.

Regan Claire – Gathering Water
Della was handed a slim folder the day she turned eighteen. Inside it was the name of her mother and the identity of a family that never tried to pull her from the foster system she hates. When Della moves across the country to claim the only pieces of her mother that still remain, she finds herself pulled into an unimaginable world —one on the brink of war — and it takes everything Della has not to drown in a destiny she didn't choose. Can she move past her anger and pain to save the people she’s come to love, or will her enemies strike before Della has the chance to become the only weapon capable of destroying them?

Theresa Kay – Dark Expanse
In a world of military space stations, planetary jumps and alien offensives, nineteen-year-old Eva Braebel's life has never been easy. She's small. She's female. And she earned the ire of a powerful General at a young age. With hard work and the support of her friends, she achieves more than she ever dreamed possible: A position as flight squadron leader and the man who she loves by her side. Eva just got everything she's ever wanted, but how long can she keep it?

Caylie Marcoe – Choose Us
Riley Logan and Travis Grayson have been best friends for fifteen years. Riley never imagined that working as Travis’s personal assistant would land her the job of undercover spy on a televised dating show meant to find him love. Travis forced her into it and now the last girl she expected is the one she wants him to choose – her.

Stormy Smith – Bound by Duty
Amelia Bradbury is the last living Elder. She has power she can’t control and has been forced to hide, while a prophecy dictates her fate even as she fights for a normal life. She faces a betrothal she can’t stop and, on top of it all, she’s lost her heart to a human. When the whole truth comes to light, will Amelia choose her duty or her heart?

Elizabeth Tuttle – Spark of Light
Nearly a century ago the world was decimated by a magical war. In their defeat, elves were captured by humans, cut off from their magic, and broken down into lifeless, drone-like slaves. Avery is different. Never completely broken, she must pretend in order to survive. But when love sparks the light inside Avery, her magic blooms to full force. It’s only once she is ripped away from this love that Avery finds herself at The Farm, facing truths she never expected and the possibility that she could be spark her people need to reignite.

Sophia Morganthal is an orphan that not only found herself flung halfway across the country to live with relatives she never knew existed, but that those relatives came from a long line of witches that require her to be initiated into their coven within the year to prevent a battle for leadership. As Sophia learns more about herself, and what being initiated into Blackthorne coven really means, she must answer the ultimate question – would she give up everything for her family?

Download the first volume of Rebel Reads FOR FREE on:

Join the conversation in the Rebel Writers fan group on Facebook.

Are you an aspiring author looking for some support? Consider joining the Rebel Alliance and we will connect you to other authors of varying levels. Bounce ideas, ask questions about the industry and the process, share and critique work…the options are endless for creating your own group of Rebels.
Posted by MissDaemon at 9:09 AM