Tessa Ever After (Caged in Winter #2)
by Brighton Walsh 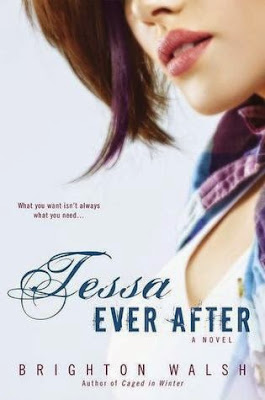 We met both characters in Caged in Winter. Jason is Cade’s best friend and Tessa is his sister.

After Cade leaves, Tessa is having a hard time adjusting to being the only one taking care of her daughter Haley. She is buying fast food and picking her up form school late. She feels guilty but she needs to work to pay the bills. Tessa is leaning more and more on Jason and pretty soon her high school feelings for him are coming back with a vengeance. Resisting him is too hard but, Jason is a player and she won’t make the same mistake twice.

When Cade left, he asked Jason to keep an eye on Tessa. Jason, true to his promise helps Tessa in everything he can but after six months he has developed feelings for her and Haley as his own. But, how can he make it work when his parents are breathing down his neck and he has never been a serious relationship kind of guy?

I love Jason and Tessa’s chemistry. They both tried hard to avoid falling for each other. Jason because he didn’t think he was good enough for her and Tessa because she wanted someone to stick around for the long run, definitely not a player.  I almost got mad at Cade at one point but he was a pretty good friend in the end.

I hope to see certain characters getting their book next.

A complimentary copy was provided by the publisher via NetGalley in exchange for an honest review.
Posted by MrsLeif at 8:30 AM

Email ThisBlogThis!Share to TwitterShare to FacebookShare to Pinterest
Labels: Review Brighton Walsh, Caged in Winter, Tessa Ever After