Two of Hearts
by Christina Lee 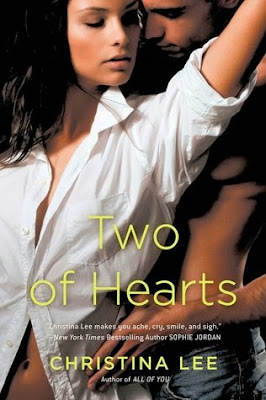 From the author of the Between Breaths novels comes a gripping romance about finding yourself while taking a second chance at your first love…
Dakota Nakos was always the resilient, strong-willed achiever. But when her father dies and she’s entrusted with the family’s casino, she feels vulnerable, scared, and more than a little emotional —not exactly the best time to see an old lover she’s never really gotten over.
Dakota once meant the world to Shane Garrity. Then suddenly he left town to train as a U.S. Marshal, and their love for each other crashed into a memory. Now he’s come home for her father’s funeral, and one look at the girl he left behind stirs up both memories and regrets, and reignites a fire he feared he’d lost forever.
Dakota may be the same driven girl she always was, but she’s also changed in ways neither could have anticipated. She’s not just a young woman searching for own identity in the Native American community in which she was raised, but one questioning her new life outside her father’s shadow. Above all she wonders if Shane can push past her weakened defenses to rekindle what they once had, or whether the intense blaze between them will ultimately reduce her heart to ashes.

“It’s simply not true that leaving is the hardest thing.  Being left was a far worse penalty.”

Dakota just lost her father and is left in charge (along her mother) running the reservation casino.  She’s always been strong-willed, determined, and confident.  Now with everyone relying on her and her father’s recent death she’s scared and emotional.   On top of all that, Shane, her old boyfriend, is back and turning her world upside down.

From the moment I read ALL OF YOU, I instantly fell in love with Christina Lee’s writing.  Her characters are always complex and entertaining and the plots are unique and fun.  TWO OF HEARTS was enjoyable and entertaining, but it didn’t hit me like her other books did.

I did love seeing glimpses of Kai and Rachel’s life and learning more about the Native American heritage.

Dakota "Dee" Nakos is Kai’s sister from Whisper to Me. She’s now in charge of her family’s casino after her father’s passing. She’s very affected by his loss. She now will have more responsibilities and she will also need to deal with her Native American culture. She has mixed blood and some people are not happy about her owning a casino. Besides this, her ex-boyfriend is in town and he seems to be determined to get her attention.

Shane Garrity comes back home for his friend Kai’s fathers memorial. He’s also here for the girl he left behind. His job as a U.S. Marshal is making him feel unfulfilled and if he has to be honest with himself he’s missing his family and his town. He never forgot Dee and maybe this time around they can make it work.


“Maybe I wonder if my life is supposed to be here, with you. Maybe I feel completely alive again around you.”
My eyes sprang up to meet his. His words stirred something so deeply rooted inside of me that my lips began trembling.


“And maybe all the implications of that are only hitting me right now, standing here in front of you,”

~~
I liked this book but I didn’t love it. Both characters were nice enough and I was happy with their love story. I just felt like their problems were easily solved, there was no real conflict.

The positives:
Shane. He was an alpha-male who recognized his mistakes and was trying to fix them. He was mature and he was ready to move forward with their relationship.
Kai and Rachel’s relationship progression. It was awesome to get a peak at their life together as a married couple.
Dakota’s determination to keep her father’s legacy.
Dakota’s mother strength.


“I’m yours?”
His eyes met mine in near defiance and I couldn’t look away even if I tried. “That’s right. And I’m yours. We clear?”

3/5 Fangs
A complimentary copy was provided by the publisher via NetGalley in exchange for an honest review.

Whisper To Me was the first book I happened to pick up in the Between Breaths series and I fell hard for Kai.  Knowing this was his sister's book, I was looking forward to diving in. Dakota and Shane's story is one of second chances and not being afraid to go after what you want, or I should say who. There is a strong sense of family, friendship and Indian customs throughout this story that really tie the characters together and add meaning to the story.

The circumstances aren't ideal, but the death of Kai and Dakota's father has brought Shane back home.  It's a chance for him to take a much needed breather, be there to support his best friends and get his head back in the game. The endless travel as a U.S. Marshall has left him burnt-out, lonely and questioning his future.

Being back around Dakota doesn't make things any easier.  Five years ago, in their senior year of college, their friendship turned into something much more.  For some reason, neither of  them fought to make things work.  They simply parted ways, with differing career goals as an excuse.

That didn't mean their feelings for one another stopped though. Dakota is under a lot of pressure running the family casino and  Shane is the only one that can provide any relief.  He's grown into a strong, protective guy, that can be bossy at times.  Which, I found sexy.

"I wanted you so damn bad, I had the taste of you, the smell of you, the feel of you on my skin for years. Only you. Nobody even came close."

I liked the history between Dakota and Shane. That they both took time to figure themselves out, let their ambitions lead them and still somehow found their way back to one another. Knowing that Dakota's father and Shane had a special relationship really cemented Shane and Dakota's connection even more in my eyes.

Without a doubt, my favorite part was getting to see more of Kai and Rachel and how far they've come.  He will always have a special place in my heart.

What I didn't enjoy was the how the story concluded.  There was a buildup throughout that I felt wrapped up too easily. It was pretty anticlimactic and predictable.

3/5 Fangs
*Complimentary copy provided by the publisher in exchange for an honest review.*

Posted by MrsAlcide at 9:09 PM