(Mis)fortune (Judgement of the Six #2) by Melissa Haag 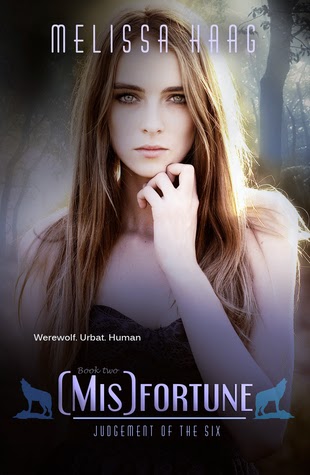 (Mis)fortune is the next book in the Judgment of the Six series by Melissa Haag. If you haven't read the first book, Hope(less), you should read that before you read (Mis)fortune. I do not think (Mis)fortune could be read as a standalone. You can check out my review for Hope(less) by clicking HERE. This book was awesome, and it is FREE!

This book, (Mis)fortune took place before Hope(less) and ended about halfway through Hope(less). This may seem odd, but it makes sense once the book ends. It seems like every book will be leading up to one big battle, and I am so excited for that! I liked this book more than the first book because there were more supernatural elements in this book. The main character, Michelle, also had a gift (just like Gabby had a gift) but Michelle's gift was different than Gabby's. Again, I won't say what Michelle's gift was, but it definitely was a cool gift! In this book, Melissa Haag went deeper into Michelle's abilities than she did with Gabby's, which is what I think made this book more interesting than the first.

So many new characters were introduced in this book, and I loved all of them! I liked how Melissa tied in characters from the first book of the series. I can see that she is trying to connect all the books and characters, which made me happy because that means we will be able to see couples from the other books! The two main characters of this book were Michelle and Emmitt. I liked both characters a lot, especially Emmitt.

(well, I picture him that pretty in my mind)

Michelle was kind of timid, but after being kept a prisoner, that made sense. She was fiercely protective of her little brothers, and I admired her for always putting the safety of her brothers before anything else. I was glad that she eventually opened up to Emmitt and his family, because I didn't want her to never trust anyone again after being kidnapped. She was a likable character and I thought she was extremely well written. My only annoyance was that anytime she went to a bar, she never got carded! I understand that she looked old for her age, but I felt like that was a little ridiculous.

Emmitt was extremely swoon worthy. Melissa Haag definitely knows how to create perfect male characters. I thought Emmitt was a great character because he always knew what to say to Michelle and went out of his way to try and earn her trust. He seemed to be the perfect balance for Michelle. Emmitt was also fiercely protective of Michelle and her brothers. Basically, Emmitt was perfect.

Just like the first book, the romance between the two main characters was a slow burn. I felt like the slow burn of this book was more understandable than the first because after a werewolf kept Michelle as a prisoner for four years, I think it would be hard to trust anyone (especially a werewolf) again. However, Melissa Haag worked her magic and wrote a beautiful romance. I swear angels started singing when Emmitt and Michelle had their first kiss because it was so STEAMY.

Overall, I thoroughly enjoyed this book! I loved that Melissa Haag went into a lot of detail with Michelle's powers and we finally learned more about what the powers might mean, who is after the girls with powers, and how many other girls have powers. If you like paranormal romances with hot werewolves, this series should definitely be one you look into!

Cliffhanger: Not really. It just made me excited for the next book, which is out!