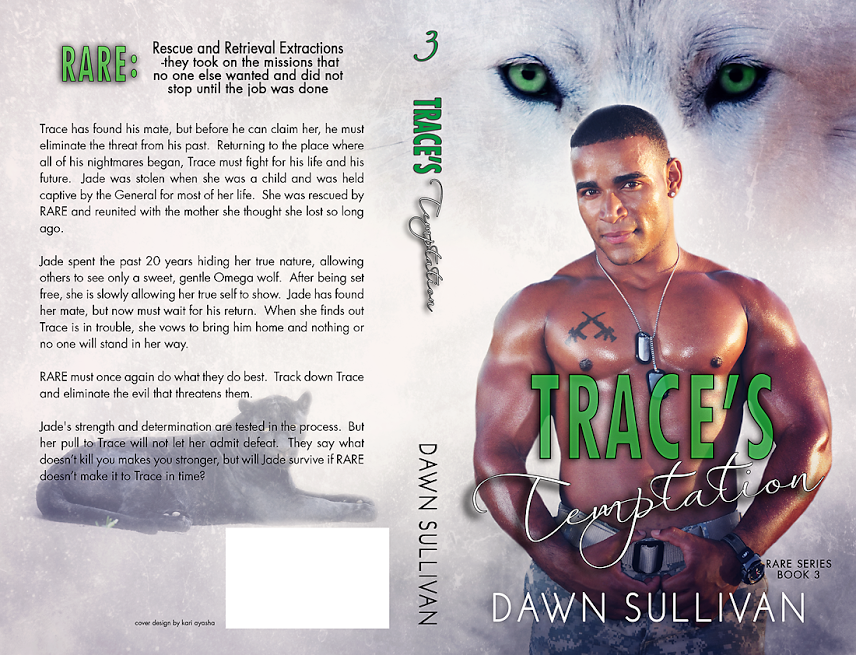 RARE:  Rescue and Retrieval Extractions
-they took on the missions that
no one else wanted and did not
stop until the job was done
Trace has found his mate, but before he can claim her, he must eliminate the threat from his past.  Returning to the place where all of his nightmares began, Trace must fight for his life and his future.  Jade was stolen when she was a child and was held captive by the General for most of her life.  She was rescued by RARE and reunited with the mother she thought she lost so long ago.
Jade spent the past 20 years hiding her true nature, allowing others to see only a sweet, gentle Omega wolf.  After being set free, she is slowly allowing her true self to show.  Jade has found her mate, but now must wait for his return.  When she finds out Trace is in trouble, she vows to bring him home and nothing or no one will stand in her way.
RARE must once again do what they do best.  Track down Trace and eliminate the evil that threatens them.
Jade's strength and determination are tested in the process.  But her pull to Trace will not let her admit defeat.  They say what doesn’t kill you makes you stronger, but will Jade survive if RARE doesn’t make it to Trace in time?

A BIG Thank You to:

Posted by MrsAlcide at 7:00 AM