Angelfall (Penryn & The End of Days #1) by Susan Ee 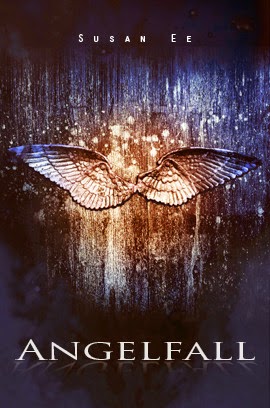 I have had this book sitting on my kindle for such a long time, and I finally decided to read it. I couldn't even remember what the book was about. I figured it must be something interesting if I had it on my kindle.  I CAN'T BELIEVE I WAITED SO LONG TO READ THIS BOOK.

Everything about this book was just so amazing. Susan's writing was so immersive and wonderful. I was completely entranced by this book. It was dark, intriguing, romantic, hilarious, and full of action. This book was nothing like I have ever read before. I loved Susan's unique twist on angels and her version of an apocalypse. The storytelling was amazing, and the characters were even better.

Let's talk about the main character, Penryn. I know that I have said heroines are strong, but I think Penryn blows them all out of the water. Penryn could defend herself, but it's not just that which makes her "strong". There are times when she wanted to give up and just cry in a corner, but she never did that. She always continued to fight, even when it seemed pointless.

"Men tend to fight differently with a woman than they do with men. The overwhelming majority of fights between men and women start with the men attacking from behind, and almost instantly end on the ground with the woman on the bottom. So a good female fighter needs to know how to fight on her back.
As we struggle, I wriggle my leg out from under him for leverage. Brace. Then tip him over to one side with a twist of my hip.
He flips onto his back. Before he can get his bearings again, I slam my heel down on his groin. I’m up in a flash and kicking his head before he recovers. I kick him so hard his head whiplashes back and forth."

Penryn knew her weaknesses, but she never let those weaknesses hold her down. She was dedicated and did was right and what was smart. I also loved how funny Penryn was, because that helped lighten the mood of the apocalypse. There was never a time where I wanted to slap her for being immature, dumb, or just plain annoying. She was also super relatable, because she was just a normal girl...trying to survive after an apocalypse. Penryn is one of the best heroines in a novel, ever.

"That calls for a witty comeback.
“Whatever,” I say.
Okay, so I won’t be getting the Witty Woman of the Year Award. “Do you want me to show you how to use this or not?” I sound surly. It’s the best I can do right now."

Now I get to talk about Raffe. HE IS SO SEXY. Seriously, I loved his character so much. He could kick series butt, and look so hot while doing it. Raffle was the ultimate bad boy with such a great sense of humor. He was so witty that I laughed out loud at some of the things he said. Raffe was passionate and dedicated, and I basically just wanted to marry him.

The romance between Penryn and Raffe was slow and beautifully developed. I absolutely loved their relationship. I liked how the romance was there, but it wasn't the main storyline. It was perfectly woven in with the main plot of the story. I could not wait for them to finally admit their feelings for each other.

" We walk for about an hour before Raffe whispers, “Does moping actually help humans feel better?” We’ve been whispering since we saw the victims on the road.
“I’m not moping,” I whisper back.
“Of course you’re not. A girl like you, spending time with a warrior demigod like me. What’s to mope about? Leaving a wheelchair behind couldn’t possibly show up on the radar compared to that.”
I nearly stumble over a fallen branch. “You have got to be kidding me.”
“I never kid about my warrior demigod status.”
“Oh. My. God.” I lower my voice, having forgotten to whisper. “You are nothing but a bird with an attitude. Okay, so you have a few muscles, I’ll grant you that. But you know, a bird is nothing but a barely evolved lizard. That’s what you are.”
He chuckles. “Evolution.” He leans over as if telling me a secret. “I’ll have you know that I’ve been this perfect since the beginning of time.” He is so close that his breath caresses my ear.
“Oh, please. Your giant head is getting too big for this forest. Pretty soon, you’re going to get stuck trying to walk between two trees. And then, I’ll have to rescue you.” I give him a weary look. “Again.”
I pick up my pace, trying to discourage the smart comeback that I’m sure will come. But it doesn’t. Could he be letting me have the last say? When I look back, Raffe has a smug grin on his face. That’s when I realize I’ve been manipulated into feeling better. I stubbornly try to resist but it’s already too late.
I do feel a little better. "

This book was all kinds of amazing. I couldn't stop reading this book. I never put it down because it was just so addicting. If you are looking for a YA book with action, romance, adventure, and badass characters, then this is the book for you.

Cliffhanger: Sort of? However, the sequel is already out!