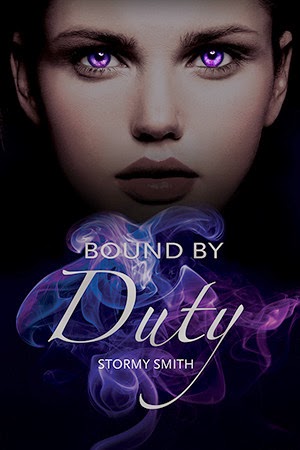 "Amelia grew up in a world of half-truths. She knows she's an Elder but has no idea what that means. Her father reminds her daily that she must maintain control but he refuses to explain why. Even worse, she's betrothed to the prince of the Immortals and she doesn't even know his name
.........

As she learns more about herself, Amelia realizes the line between love and duty is a thin one. As her power continues to increase exponentially and her questions are slowly answered, Amelia must make the ultimate choice. The question is, will her head or her heart win the battle? "

Obviously, I was very intrigued by this book, and I couldn't wait to read it! The book started off a little slow for me. I think it was because there was a lot of dialogue about the magic and supernatural aspect of the book, but it wasn't explained. I was mentioned numerous times, but we didn't learn what all the magic lingo meant until a little bit into the book. Once things started to make sense, I got really into the book. The supernatural world that Stormy Smith built in this book was extremely intriguing, and I loved learning about it and Amelia's powers. I am excited to see Amelia develop her powers more in the next book.

Amelia was under a lot of pressure, and I definitely felt bad for the girl. I know there were times when I wanted to shake Amelia and tell her to stop being to hesitant, but then I had to take a step back and remember what she was going through. Amelia had a lot on her plate in the magic realm, and falling in love with a forbidden boy definitely did not make it any easier.  I did like Amelia a lot, and I think she has potential to become a great character as the series progresses. She was extremely stressed in this book, so I couldn't really fault her for the things she did. Amelia was told this:

"The queen must be stopped and you are our only hope."

I am a year older than Amelia, and I know I definitely would not be able to handle that type of pressure.

The forbidden romance in this book gave me all the feels. I want Aidan and Amelia together so badly that it hurts my heart. I loved Aidan so much. He was perfect for Amelia. He never pressured her into anything, and he was always there to support her even when she wouldn't tell him what was going on. Aidan was witty and charming. He definitely is a new book boyfriend for me. I have faith that this forbidden romance will work out.

I also really liked Bethany, Amelia's best friend. A lot of side characters can be annoying in books, because I feel like they take away from the plot. However, Bethany was different. What was great about Bethany's character was that she was adorable and hilarious. I always loved it whenever she was in a scene. Cole, Amelia's brother, was awesome as well. He was fiercely loyal to Amelia, and super hot. I definitely liked him. Micah was the character I loved to hate. I went from hating him, to loving him, to hating him again. I have decided that I love to hate his character.

THE ENDING OF THIS BOOK KILLED ME. I CANNOT BELIEVE IT ENDED LIKE THAT. I don't want to give any spoilers away, but I definitely was shedding tears at the ending.

This book was a lot of fun to read. It had magic, mystery, romance, action, and humor. Sometimes the dialogue was a little lack luster, but as a whole the dialogue was well written. I am so happy that I had the chance to read this book. I enjoyed it so much and I cannot wait to read the next book! I want Aidan back. I also want him and Amelia to make their relationship work.

Posted by MissDaemon at 2:40 PM