Enchanted Heart (The Game of Hearts Series) by Mindy Ruiz 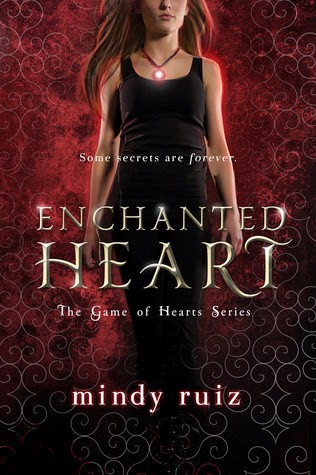 This cover is beautiful, and it automatically drew me into the book without even reading the plot. Then I read the plot, and I was even more intrigued.

"Cloaked in the shadows of the glitz and gaudy lights of Vegas lies a power struggle centuries old. One wrong step and Cassandra could destroy the delicate web of secrets. Now an enemy she never knew existed is after her, and the one boy who may be the missing piece to the puzzle — and her heart— is the one person she can’t afford to trust."

However, I was slightly disappointed with this book. There were some things about this book that I disliked and that I really liked a lot.

What I disliked: One of my major issues with this book was that sometimes I felt like parts of the book were missing, and I was confused as to what was happening a lot of the time. I would flip back through pages to see if I missed explanations, because I was just so confused at some points of the book. There were also some grammatical errors through out the book that were annoying.

I also really didn't like any of the characters. Malory was mean, Cassie was annoying, and A.J. was kind of just bland in my opinion. I wanted to like A.J. because I knew he was supposed to be this alpha male who was totally swoon worthy, but he really wasn't. I felt like A.J. had a lot of potential to be a great love interest, but he feel flat. He did some romantic things and said some sweet stuff to Cassie, but I just couldn't connect with it. A.J. was kind of just there as hot eye candy in my opinion.

I think the issue was that Cassie and A.J.'s romance was an instant love sort of relationship. Cassie automatically trusted A.J, even though she didn't know him, at all. That seemed a bit ridiculous to me. A.J. always was touching her, holding her hand, kissing her hand. It all made me want to roll my eyes because they had known each other for about a day. A.J. had called her "princess" about two times, and then when her dad said it, she told him not to use it because she was "heart broken" over A.J....who she had just met.

What I liked: When I could understand what was going on with the Greek mythology and supernatural elements, I really enjoyed that aspect of the book. I felt like the author had a really awesome idea, but it just wasn't executed well. The world she built had a lot of parts that intrigued me. I thought it was so creative that the four ruling houses of Las Vegas were based on card suits (the Hearts, Spades, Diamonds and Clubs). I also liked that there was a lot of action in the book. I never felt like there was a dull moment in the book, which kept me entertained.

Overall, it was a decent book, mainly because of the mythology and action. Those two things are what helped me decide to give the book a 3 fangs review instead of a 2. I want to learn more about the mythology and the supernatural element to this book, because I am still a little confused . I will read the sequel because I am interested to see if things will be explained more, if characters will develop more, and if the relationships will develop more. I think this series has good potential.

Posted by MissDaemon at 4:05 PM