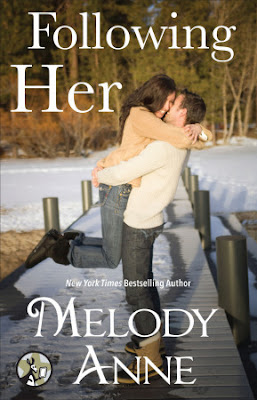 Ella Brooks is strong-willed, independent, and stubborn, and when she hears something she’s not supposed to about her shady boyfriend, her safety is at risk. Much to her dismay, her cousin sends FBI Agent Axel Carlson to keep an eye on her. Ella’s determined to resist the infuriatingly sexy bodyguard—she can take care of herself!—but she soon discovers that beneath the six-pack abs and amazing biceps lies an equally amazing heart. But will a mysterious threat keep them from finding their happily ever after?

Ella Brooks is an attorney. She's in the process of testifying against her ex-boyfriend/boss. Learning awful things about him while they were together has made her leery of trusting men. She's also in danger but she refuses to be bullied into dropping out of the case. Her cousin Bryson is worried about her and he sends FBI agent Axel Carlson to follow her and help her be safe. Ella isn't too happy about it. Yes, the man is fine but she has walls bigger than the Wall of Game of Thrones.

Axel is on leave. He hasn't been happy with his job for a while now. He welcomes a chance of scenery and he's happy to help his friend Bryson Winchester when he asks him to protect Ella. He's attracted to her and he doesn't hide it. Convincing her to give them a chance is another story.

Sweet short story! Both of the characters were likable despite Ella's stubbornness. She was so sure she wasn't in danger, when she clearly was. Axel was an alpha but he listened to her. I like him. I also liked Ella's girlfriends Maycie and Reese.

Melody Anne is the author of the popular series, Billionaire Bachelors, and Baby for the Billionaire. She also has a Young Adult Series out; Midnight Fire and Midnight Moon - Rise of the Dark Angel. She's been writing for years and published in 2011. She hold a bachelors degree in business, so she loves to write about strong, powerful, businessmen.

When Melody isn't writing, she enjoys spending time with her family, friends, and pets. She lives in a small town that she loves, and is involved in many community projects.

See Melody's Website at: www.melodyanne.com. She makes it a point to respond to all her fans. You can also join her on facebook at: www.facebook.com/authormelodyanne, or at twitter: @authmelodyanne.