All of Me by Kelly Moran 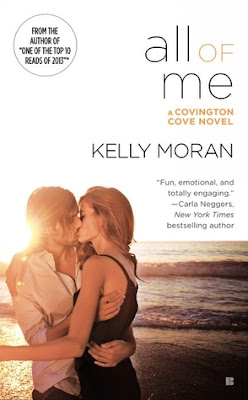 For ten months, bestselling novelist Alec Winston hasn’t been able to type a single word, and he’s coming dangerously close to breaching his publishing contract. An invitation from his brother to spend the summer in Wilmington Beach might be just the thing to blast through his writer’s block. Yet Alec discovers more than a spark of inspiration on the sunny sands. He meets an amber-eyed muse who makes him think about much more than books . . .
Faith Armstrong has finally gathered the courage to leave her past behind and accepted a job as a private tutor, hoping for a fresh start on the North Carolina coast. This is the home she’s always longed for—not just a place, but a state of mind. She’s felt invisible her whole life, so the host of new friends and the attention of a sexy author have her head spinning.
But Alec has a secret that could prove this isn’t the life Faith dreamed of after all . . .

This book is a sequel book, and I unfortunately didn't get the chance to read that book before reading this book. I was extremely happy to find that the first book wasn't a necessary read to understand this book, but I do want to go and read the first book now! Kelly Moran did a great job of making this book understandable for people who were reading this as a stand alone. I really enjoyed her writing style throughout the entire book. She did a great job of intertwining humor with realness.
Some of the realness came into play with the main female character, Faith. I felt so bad for her. I really enjoyed learning about Faith and her home life. I thought it gave a lot of dimension to her character. I also really liked the main male character, Alec. I liked how he was straight forward a lot of the time, and really humorous. However, he sometimes came off as a jerk. Another thing I really enjoyed was the romance between Alec and Faith. Their romance was frustrating at times, but I loved their chemistry. Alec made me swoon numerous times in this book.

As I mentioned earlier, the romance between Alec and Faith was frustrating at times. Their romance got extremely frustrating closer to the end of the book. Faith was naive and would always just walk away from the situations. Alec was extremely indecisive when it came to their relationship. Both of the characters became so annoying during those times. It became repetitive and just straight up annoying.

Overall, I really enjoyed this book. It was a sexy and fun read mixed with some real topics. It was the perfect summer read! I would recommend this book to anyone looking for a sexy summer book. I am really looking forward to reading more of Kelly Moran's books in the future.
4 / 5 Fangs
*This book was given to me in exchange for an honest review.*