The Allure Of Julian Lefray
by R.S. Grey 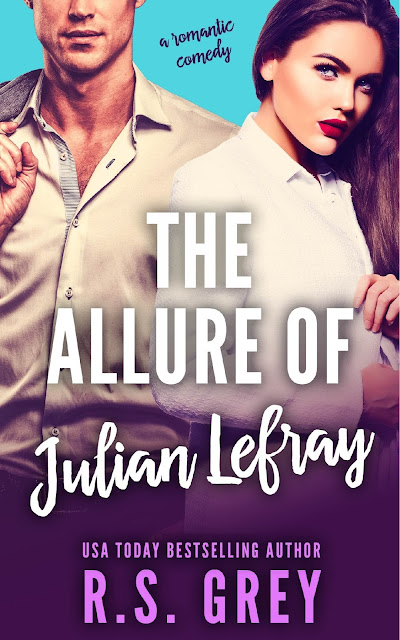 Lily, you predictable perv. I knew you’d open this email faster if I tempted you with a glimpse of JT's “PP”. Well, put your pants back on and grab some bubbly because I have much better news to share.

As of tomorrow, I’ll be the new executive assistant at Lorena Lefray Designs. I am SO excited, but there’s one itty bitty problem: I won’t be Lorena’s assistant. I’ll be working for her older brother, Julian.

I know what you're thinking- "But Jo, what’s the problem?"

Google him. Now. He’s the man in the fitted navy suit whose face reminds you that there’s hope yet for this cruel, ugly world. Keep scrolling…Do you see those dimples? Yup. That’s the Julian Lefray I will be reporting to tomorrow morning.

I'm not sure how to start because there is so much I want to say. I guess I'll start by saying that this is the first book I've read by the lovely, R.S. Grey. I'd seen the awesome covers everywhere on social media and loved them but never sat down to actually read them. Once I saw that the second book in The Allure Series was going to release I knew it was my time, and I'm so glad I did! Romantic comedies are some of my favorite books because they always have the best banter. Don't get me wrong I love dark reads as well, but there is something about romantic comedies that draws me in every. single. time. I love sitting and thoroughly enjoying a story that makes me laugh my butt off, and this book made me do just that. In the first couple chapters I fell in love! Not just with the female protagonist, Jo, but also with this author for bringing, Jo into my life.

Jo has recently moved to New York City from a small almost nonexistent town in Texas, and when I say recently I mean she's only been in New York for a couple of weeks. She has a fashion blog and is trying to find a job in the fashion industry. She arrives in style to her very first New York Fashion Gala, and when I say style I mean she takes a cab of course! As luck would have it she comes upon the one person who could give her that first job that she is in dire need of, so she can pay her rent and all the student loans that have piled up on her. That person being, Julian Lefray, the brother of designer, Lorena Lefray, to whom she has recently submitted a resume. She takes that opportunity to speak with, Julian but only succeeds in embarrassing herself, yet she gets the interview and the job! Woohoo! Now the real work begins, she has to prove herself to, Julian. Julian is intelligent, rich, and downright gorgeous! The crazy thing is they get along fantastically, the only problem is they are very much attracted to each other, and with both of them not having many friends in the city they end up spending a lot of time together. Jo needs to keep this job badly, so she will only let it go a far as flirty banter, or so she keeps telling herself.

Jo is such a fantastic character. She is such a relatable character too, I mean who doesn't love a girl who loves doughnuts, fashion, and thrifty shopping. She has a plan in mind and knows that she won't give up until she makes something of herself in the fashion world. Jo is hilarious, she's sweet, she's caring, making her perfect in my eyes. Julian is also a great character. Along with being rich and gorgeous, he's also funny and down to earth. He's not in any way pretentious because of his wealth, which only makes me love him more.

The banter in this story is downright perfect! There were so many times while I was reading that I laughed out load, not just a little laugh but a loud obnoxious laugh (seriously! ask the people sitting next to me at the cafe). Their internal thoughts also had me falling over from laughter. Throughout all the laughter I still truly felt for the characters and the struggles that they were facing, Jo most of all. I loved this story, I loved the characters, and I now love this author!

I complied a list of some of my favorite tidbits and quotes from this book just in case you don't believe my rant about how funny it is.

'Either that, or for the sexy man from the line to come over and say, "Nobody puts baby in a corner." And then we'd perform that routine from Dirty Dancing, and everyone would clap,...'

"I feel overdressed in a tux. You should have told me the theme for the night was 'eccentric cat lady'."

"You can't bring me pizza late at night,' I said, trying to get my brain back on topic. "Pepperoni is foreplay to me."

'Hey God, if you're up there, this would be great time for you to work some miracles. Like maybe you could turn this bar of soap into a curling iron.'

'If I asked the mirror who it considered to be the fairest of them all, it'd reply with, "Damn girl, it ain't you. You're a hot mess."

'I'd only met them once, at a small blogger conference, and they hadn't been the nicest women in the world, but a bitch in need is a friend indeed. Or something like that...'

'A stray chocolate sprinkle was lurking in the corner of my mouth from the donut I had allegedly eaten a minute before.'

I hope these pique your interest and get you to read this book. Tootles!

I am a lover of books, chocolate, reality TV, black labs, and cold weather. Seriously, if I had it my way I would be curled up on the couch with all of those things...everyday. ​I live in Texas where I spend my free time writing and reading. My favorite authors are Mindy Kaling & Jonathan Safran Foer. I'm a comedy geek and love all things funny. Women like Tina Fey, Amy Poehler, and Mindy Kaling are definitely the biggest inspirations for my writing, though I think my work tends to skew a bit smuttier than theirs.