A Different Side by CM Doporto 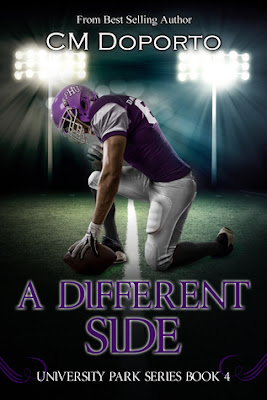 The highly anticipated story from the University Park Series.
Park Hill University’s star quarterback, Raven Davenport, has every woman dying to get caught in his trap, but he’s only interested in catching one girl – Lexi Thompson. But will he learn how to deal with his inner demons or will they continue to control him to the point of destroying what he loves most? Read Raven and Lexi’s story from a different side.

Opposing Sides (#1):
College senior, Lexi Thompson, finds herself in a relationship to be wed to the university’s star baseball pitcher, Collin Norris. Collin’s damn hot, but his lack of spark has Lexi thinking twice before she says ‘I Do’. When she’s forced to tutor bad boy football quarterback, Raven Davenport, she soon discovers all the things she’s missing in her relationship with Collin. Will she succumb to the temptations enticing her, or will Collin be able to convince his sweet, innocent fiancée that his love for her is genuine despite his lack of affection?


The Same Side (#2):
The engagement’s off and with Collin behind her, Lexi has decided that the temptations of Raven Davenport are too strong to be ignored. It doesn’t take long for Lexi and Raven to find themselves wrapped in each other’s affection, but not without the challenges that life poses. But can she withstand the world he’s created or will the forces that are against them rip them apart? Love, faith, betrayal, and heartache ripple through their lives as they fight to be on the same side.


The Winning Side (#3):
Lexi’s determined to keep her word and stand by Raven’s side because her love for him is too strong to deny.  As Raven learns to deal with the issues that are destined to destroy him and their relationship, their love is taken to a new level. As doors are closed and new ones are opened, Lexi and Raven find themselves in a heavenly bliss, but not without the challenges from Raven’s past. With a true test of love, Lexi and Raven have to decide if they are willing to do whatever it takes to be on the winning side.
Recommended age: 18 years and older due to language and sexual situations

Born and raised in the United States of America in the great state of Texas, CM Doporto resides there with her husband and son, enjoying life with their extensive family along with their Chihuahua, Mexican Red Head Parrot and several fish. She is a member of Romance Writers of America, where she is associated with the Young Adult Special Interest Chapter. To learn more about her upcoming books, visit www.cmdoporto.com and sign up to receive email notifications.