Anna and the French Kiss
by Stephanie Perkins 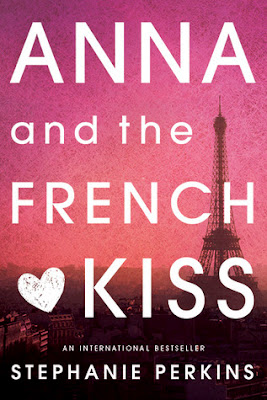 Anna Oliphant is a stranger in a stranger's land. Her life was torn upside down when her father, a popular writer, decides to send her to do her senior year at a boarding school in Paris. She doesn't want to go. She wants to stay home with her best friend and her almost-boyfriend. She is shy, loves movies, wants to be a critic, she embarrasses easily and speaks no french. Her first night alone she meets Etienne.

Etienne St. Clair is beautiful, smart, has a British accent but has a serious girlfriend, Ellie. Not only that but the first girl who has been nice to Anna, Meredith, has her eyes on him too. There is a code against this, right?

Anna tries to fight her attraction to him but they can't seem to stay away from each other for too long. A decision has to be made and someone is going to be hurt regardless.

I knew I needed to read this book. All my friends who have read it, loved it. It has been on my TBR for a while.
From the beginning Anna and the French Kiss made me want to go back to Paris. It was easier to relate to the places Anna was visiting and the awe she was feeling.
I believe the characters were fully developed including their flaws. I could feel how confused Anna was about her feelings and the same could be said about Etienne.

The main reason why I can't give it 5 Fangs has to do with a spoiler.


I can't agree with cheating. Holding hands, kissing, sleeping in the same bed is still cheating. Anna was mad with her friend for taking away the guy that she liked but she was doing exactly the same to Ettienne's girlfriend. Just because we think the girlfriend is not as nice as Anna it doesn't mean is right.