We are so excited to bring you the Review & Excerpt Tour for Lorelei James' STRIPPED DOWN! STRIPPED DOWN is a Blacktop Cowboys Series Novella brought to you by 1001 Dark Nights. It is due to be released on September 1, 2015! Grab your copy today! 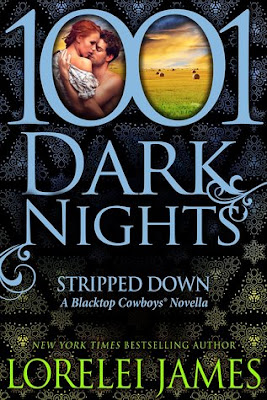 A Blacktop Cowboys Novella: From New York Times and USA Today bestselling author Lorelei James, a new steamy story of the Blacktop Cowboys... Never challenge a cowboy to a little naughty competition… A flirty game of sexual truth or dare between best man, Wynton Grant, and maid of honor, Melissa Lockhart during their BFF’s wedding reception results in a steamy hookup. But their plans for a one and done change when a family crisis leaves Wyn shorthanded at the Grant Ranch. Experienced horsewoman Mel volunteers to help out and gets way more than she bargained for living under the same roof as the sexy rancher. Playing house has never appealed to Wyn…until now. But the feisty redhead is keeping secrets and Wyn’s not above stripping her bare—body and soul—to get to the bottom of it…

“But there’s something I’ve got to do first.” He kept ahold of Mel’s hand as they exited the dance floor.
She had no idea what was going on. When it appeared they were headed to the bar, she started crafting excuses on why she couldn’t do shots with him. But Wynton strolled right past the bar and out a rear exit.
It had gotten chilly since the sun had set. Mel shivered, wishing she’d grabbed her wrap.
Then she found herself absolutely burning up, pressed against the side of the building by two-hundred pounds of hot cowboy. Good Lord. The heat in Wynton’s eyes nearly set her skin on fire.
There was no speech about how much he wanted to kiss her. He just did it. Lowered his head and planted his mouth on hers.
He didn’t have to prove he was a passionate man by thrusting his tongue past her lips and into her throat. He proved it with tender nibbles and teasing licks. A gentle pass of his mouth. Again and again. As if he had all the time in the world.
Each time Mel parted her lips ever so slightly, breathing him in, she felt his tongue softly licking into her mouth. So when he finally kicked up the heat into a full-blown soul kiss, it seemed as if they’d been kissing for hours.
Wynton wrapped one hand around the back of her neck; his thumb stroked the bone at the base of her skull, sending tingles down her spine. He’d stretched his other arm across her back and clamped onto her right butt cheek. The hard wall of his chest pressed against hers, leaving no place to put her hands except to grip his biceps.
She was just glad she had something solid to hold on to because the way he kissed her left her breathless, boneless, and mindless.
And wet.


His mouth left hers to drag kisses down the column of her throat. “If we weren’t needed inside in like a minute, I’d already be inside you.” He stopped and breathed heavily against her skin.