After You by Jojo Moyes 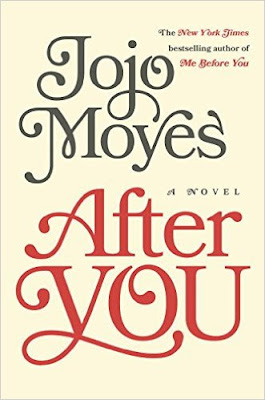 How do you move on after losing the person you loved? How do you build a life worth living?

Louisa Clark is no longer just an ordinary girl living an ordinary life. After the transformative six months spent with Will Traynor, she is struggling without him. When an extraordinary accident forces Lou to return home to her family, she can’t help but feel she’s right back where she started.

Her body heals, but Lou herself knows that she needs to be kick-started back to life. Which is how she ends up in a church basement with the members of the Moving On support group, who share insights, laughter, frustrations, and terrible cookies. They will also lead her to the strong, capable Sam Fielding—the paramedic, whose business is life and death, and the one man who might be able to understand her. Then a figure from Will’s past appears and hijacks all her plans, propelling her into a very different future. . . .

For Lou Clark, life after Will Traynor means learning to fall in love again, with all the risks that brings. But here Jojo Moyes gives us two families, as real as our own, whose joys and sorrows will touch you deeply, and where both changes and surprises await.

If you've read Me Before You, you know what I was feeling when I finished it. I was utterly destroyed! I was a completely wrecked, sobbing mess of a person. I fell hard for, Lou and Will's story. It evoked such emotions in me that even I didn't understand. It left me pining for a happy ending for, Lou. Even though Will made the decision he did, he also gave Lou a reason to live.

After You picks up 18 months later in London, England. Lou has traveled Europe and has now settled down in an apartment and is working at an airport bar. The thing is she's not living at all! She ends up having a terrible accident and has to move back home for a few weeks. Somehow that stay ends up kicking her into high gear and she finally decides to move back to her apartment in the city. She has a very surprising visit soon after which puts her life in a bit of a tailspin. Will didn't just leave her with a letter, but with so much more. She also starts up an relationship with one of the EMT's that came to her rescue during her accident, Sam. I really love same, he is so full of wisdom, and willing to share it. He is one of the best things about this entire story!

All I wanted was to see a happy ending for, Lou. After everything that she went through 18 months prior I just wanted to see her happy and fulfilled, even in love again. I don't know if I'm satisfied with the ending though! I'm still left wondering. I feel like it's still incomplete. Even though the ending wasn't exactly what I wanted the story as a whole was very good. There are a few surprises thrown into the mix that made the story very interesting indeed.