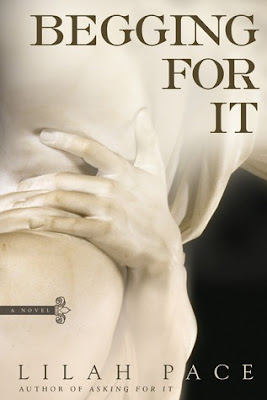 Begging for it has a fantastic writing. Lilah Pace is a master. I was hooked from the moment I read the first page. Asking for It was amazing and I won't lie and say I didn't have some trepidation before starting it. I didn't want to be disappointed. Thankfully, I shouldn't have worried.

The book starts a few weeks after Asking for It ends. Jonah and Vivienne meet again and their connection is more than sexual. They have fallen in love and staying away is not so easy. They are still "playing" until a rapist is on the loose and no women feels safe in the college campus area. The police turned their investigation towards Jonah and here is where I think Vivienne shines. She is his support and she helps him in whatever way he needs it. She is there for him 100%. She also voices her needs and stands up for herself. She acknowledges her dark desires and she is ready to face them.
Jonah is a strong man but even someone like him can feel doubts when faced with some many things coming at him at once. He has to deal with his fantasies, making Vivienne happy, protecting himself and his siblings from his step-father and on top of it all the police think of him as a suspect.

These characters pain was so vivid, I found myself wanting to hug them both.
I won't ever understand Vivienne's family. I wanted her to hate them for everything they have done.
I'm happy she had great friends who supported her and loved her. Let's not forget Jonah's love for her. He was perfect. A mixture of understanding and a reality check for both. A smart man but a quiet one, sexy and dark but with a mix of a nerd in him.  Vivienne is a great heroine. She is smart but she's still healing her emotional wounds.

These two books were unlike anything I’ve ever read before.  If you haven’t read the first book, stop reading. There may be small spoilers below. (Also run right now and go buy book one, ASKING FOR IT. You won’t be disappointed.)

Like the warning states above this book isn’t for everyone.  It deals with fantasy rape and other hard topics.   As we know from book one, Viviane had an unimaginable childhood that resulted in her fantasizing about being raped.  It’s not glamorous or optional for her. . .  It’s a necessity.  When Jonah meets her at a party and overhears her ex boyfriend talking about her needs, he makes a deal with her.  They will “role play” and he will always keep her safe.  Neither of them expected to fall for each other so quickly.

When it gets too intense for them Jonah calls off the relationship. And that’s how BEGGING FOR IT begins.  Jonah and Viviane are not together but it’s only a matter of time before they get back together.  The bond and connection the two of them share is undeniable.  Will they be able to get through the obstacles that are thrown between them or will their pasts and fantasies destroy their unbreakable bond?

“We’re both in danger of drowning.  But you’re doing your damnedest to swim, and I’m nothing but the weight dragging you down.  So I’m cutting you loose.”

Like I mentioned above this is one of the best stories I’ve read.  I definitely won’t be forgetting about Viviane and Jonah anytime soon.  I was so drawn to them and their story I couldn’t put the books down.  Lilah Pace is a writer to watch.