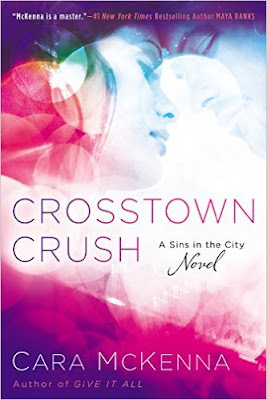 This story isn’t for everyone that’s for sure.  It involves a couple with a very unconventional marriage.

Mike and Sam have an arrangement.  On nights that they are feeling in the mood, Sam will go out with her friends then come home and pretend that she was out with another man.  She’ll give her husband fictional graphic details about her casual encounter with a man that’s always better than Mike, and knows how to meet her needs.

Mike loves the thought of watching another man with his wife.  When Sam bumps the arrangement and puts in an add for a man that can make their fantasies a reality, Mike sees all his fantasies come to life.  But what happens when hearts get involved and lines are crossed?

“My kink is about sex.  Sex isn’t sacred to me, apparently.  But feelings are.”

So this book gave me mixed feelings.  I loved the uniqueness and originality. I’ve never read a story where the hero is an alpha cop but wants to be belittled in the bedroom.  I get it, I do. The author gave the hero’s reasoning for his actions and fetishes and it made total sense.

With that being said Crosstown Crush was a lot to take in.  When Bern, the third person in their arrangement, came in I really loved him. He had his own reasons for agreeing to do this for Mike and Sam.  It seemed the three of them had great chemistry and kept their boundaries in tact.

When lines get crossed it started getting harder for me to understand. But I think at the same time that’s what I enjoyed about it. It wasn’t typical or conventional. It made you think and appreciate Mike and Sam. . . and even Bern.

I’m not going to mention anything else, but if you are looking for something that’s completely different and still amazingly written, check out Crosstown Crush.  You may not love it, but it will keep you thoroughly entertained until the very end.

She headed for the bustling bar, and oh fuck, there he was.

He’d told her what he’d be wearing, but it was his face she recognized. Funny how accurate her mental picture had been, based on only that one snapshot. She slowed to a halt, her stomach plummeting to her feet, the room feeling like an elevator with a snapped cable.
Be cool, kid. You’re a shameless slut tonight, and don’t you forget it.
She blew out a tense breath and kept on walking.

Bern’s picture had attracted her, but he was so much . . . more, in three dimensions. Even seated on a stool, she could tell he was big. Big and substantial, with long legs and a strong, handsome profile. His hair was as messy as in the photo, tucked behind his ears, black in the low light of the bar. That picture must have been taken at the height of summer, as his complexion was fairer than she’d expected. A modest beard covered his jaw, neither wild nor fussy. He looked rugged and capable, as though he’d just come from the woods, doing something obscenely manly. Or that was what Sam’s libido decided.

She swallowed, throat feeling thick. He was as sexy as any guy she’d covertly checked out during the girls-only cocktail dates, casting her fake flings. Sexier. A pang of pleasurable guilt warmed her skin.
Sexy and punctual.

Bern turned as she approached, and she thrilled at the recognition that flashed across his face. His smile was the perfect mix of mischief and shyness, so exactly what she felt, herself.
There were no free stools, giving Bern a chance to bank some chivalry points and kick off his role as smooth-talking, seductive stranger. He stood as she reached the bar. Sam kept her attention on the taps as though she were deliberating.

“Here,” he said, patting the stool.

“Please.” He grabbed his half-drunk glass of beer and stepped back so she could have a seat. She sat with her back to the bar, crossing her legs. Just as her single self might’ve done if a handsome, actual stranger approached her, she kept her purse in her lap to camouflage any unflattering business her snug jeans might be doing to her belly. Huh. Twenty-five again, indeed. She hadn’t felt this self-conscious in years.

“Sure.” Oh, he was tall. Taller than her husband, perhaps six two to Mike’s five eleven, meeting one point of his criteria. As promised, he wore a plain gray T-shirt, and beneath it she could make out the contours of his chest and shoulders, trim and powerful as his bare arms. She liked the soft-looking hair there, the shapes of the fingers wrapped around his glass.

I could totally bang this guy if I wanted. Crazy. And did she want that? For herself, as much as for Mike . . . ?

He came close, leaning between her and the next seat to get the bartender’s attention. She studied the silver streaked at his temples and peppering his facial hair and nearly swooned right off her perch. His eyes were blue, but not bright like Mike’s. More a stormy sea than a summer sky. Breathing him in, she found no cologne, just the faint but distinct smell of a new man, a scent you couldn’t buy at Sephora. He ordered her wine and told the bartender to add it to his tab, his voice twice as rich and deep and thrilling as it had been on the phone.

For a split second Sam felt busted, realizing Mike was watching her checking Bern out. But busted was the name of the game.

Bern passed her a dangerously large glass of red and stepped back, tucking a thumb in his front pocket and sipping his beer. His thigh was only a couple inches from her crossed knees, and she wondered how warm he’d feel through their two pairs of jeans.

“On your own tonight?” he asked.

“Yeah. My name’s Bern.” He freed his hand to shake hers. And what a shake—firm and warm and solid. She wished Mike could have felt it, too. Meet the man I might just want to fuck while you watch.

Posted by MrsAlcide at 9:08 AM