The Allure Of Dean Harper
by R.S. Grey 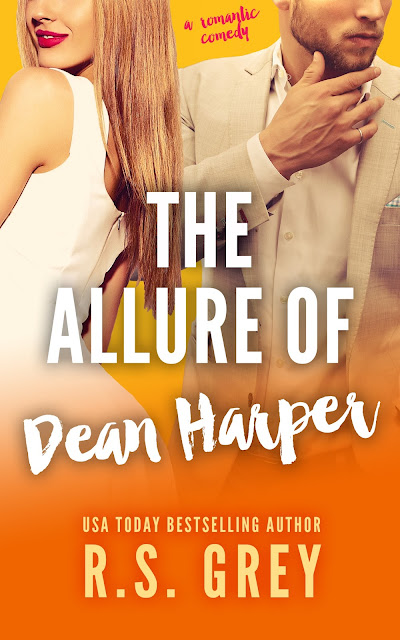 I hope you’re enjoying a breakfast of regret and sorrow.

Because you sent me to work for Dean Harper, aka a control freak in a tailor-made suit. Sure he owns the trendiest restaurants in NYC, but c'mon Jo, his ego makes Kanye West look like the Dalai Lama.

He's the type of guy that only hears the word “no” when it's followed by “don’t stop.”

Working for Dean Harper would be like selling my soul to the devil…and before you say anything, I don’t care if the devil has punch-you-in-the-gut brown eyes and an ass to match. My soul isn’t for sale. 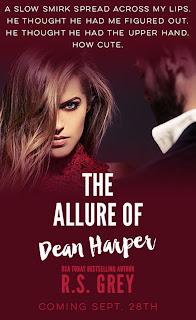 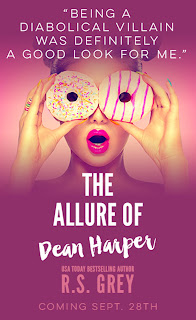 I've got the fever people! Yes it's true! I am now obsessed with all things R.S. Grey. I guess I should begin my creepy social media stalking now. I read, The Allure Of Julian Lefray and fell in love, and now that I've read, The Allure Of Dean Harper I'm completely obsessed!

Lily moved to New York City to spread her wings, and be close to her very best friend, Jo. She's been in the city for a total of one day and is sitting at a local restaurant's bar when some random dude offers buy her a drink. He is definitely not the kind of guy she would ever be interested in and when he puts his hand on her arm she is out of there as fast as possible. As soon as she's out the door she gets a call from a restaurant she applied for a job at and is asked to work that night if she can. Of course she can! She makes her way there on her two feet and gets there in time to be completely stereotyped, but she needs the job and isn't going down without a fight. She has a culinary degree after all. She makes her way to the bar and soon proves herself to, Zoe, the restaurant manager. So she has a job and is making drinks like a pro when a total ass of a customer sits down at the bar and asks for a drink. He asks her remake it a few times because he says it's not right, but she doesn't remember the last time she made a drink wrong. She isn't rude but also doesn't feel the need to put up with him, and tells him they don't need his business. Wrong! not only do they need him but he holds her job in the palm of his hands, well the job she did have at least. Turns out that that horrible man is Jo's friend, Dean. They clash, oh boy do they clash. He's rude and arrogant. She's loud and opinionated. They hate each other, can't stand to be in the same room with each other, and that is not good news for their friends, Jo and Julian. Having Julian upset is also not good for Dean because he needs his help to finance his new restaurant. Ever since Lily showed up she has been nothing but problems for Dean and it is a little more than aggravating, so what can he do? He decides that keeping his friends close but his enemies closer might just be what he needs to do, so he offers Lily a job on his team for the new restaurant. They do not work well together whatsoever, but as time passes that burning hot rage turns into something else. Dean can't let Lily affect him any more than she already has. He has plans to be one of the biggest restaurateurs in the industry and she is taking his eye off the prize, only is that really what he still wants in life?

"There's a fine line between persistence and annoyance."

"Is that the same line that falls between being a control freak and just being an asshole?"

This books was crazy hot! all of the fighting was definitely the best kind of foreplay for these two hot headed characters. Lily is sexy and sweet, Dean is hot and rough around the edges, together they are the best combination. I also love the friendship between Lily and Jo. They are there for each other no matter what comes their way. They give each other advice but also respect boundaries. I loved reading their conversations because there was always some kind of hilarious sarcasm. While reading this story I was envisioning amazing food and tasty drinks the entire time. I also happened to be listening to sexy and romantic Spanish music while reading. The music I was listening to, mixed in with all of the Spanish vibes, and the hot as hell arguments in the story kept things VERY INTERESTING! Not only did this book make me laugh but it also made me cry. The writing had me truly feeling the intensity of the struggles, Lily and Dean were going through, and only made me wish for a happy ending.

I am a lover of books, chocolate, reality TV, black labs, and cold weather. Seriously, if I had it my way I would be curled up on the couch with all of those things...everyday.

I live in Texas where I spend my free time writing and reading. My favorite authors are Mindy Kaling & Jonathan Safran Foer. I'm a comedy geek and love all things funny. Women like Tina Fey, Amy Poehler, and Mindy Kaling are definitely the biggest inspirations for my writing, though I think my work tends to skew a bit smuttier than theirs.