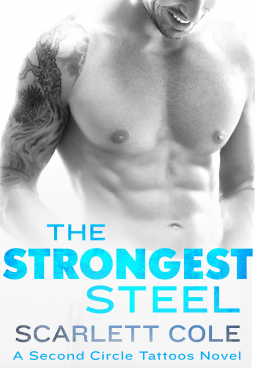 The plot of this book seemed pretty average, but I love a man with tattoos, so I knew I had to give it a chance. I was pleasantly surprised with how great this book was! There was something to this book that made it stand out compared to other books with a similar plot. I was blown away when I found out that this was Scarlett's debut novel, because I would have thought this book was written by an author who had multiple successful books. I really applaud Scarlett for creating such a fun debut novel.

I really enjoyed how innocence and caring Harper was. Her emotional journey through this book was both heart breaking and heart warming. I found her character to be realistic and relatable. Harper was adorable, and I always wanted to hug her. My only issue with Harper was that I wish she would have been truthful with Trent earlier in the book. I felt like Harper waited a little too long to tell Trent the truth about her past. Other than that, I did like Harper.

Trent was just a swoon worthy as I was hoping. He was a kind, funny, and romantic bad ass. I really enjoyed his character, and I especially loved getting sections of the book in his POV. I would marry Trent in a heartbeat! His chemistry with Harper was palpable. They had a lot of extremely steamy scenes together in this book. Trent and Harper also had a beautiful emotional connection that made their relationship really strong. I thought the romance in this book was written and developed really well.

There were times in this book were I felt like the pacing was a little slow. I also thought there were some monologues that were unneeded and conversations that were unnecessary. Other than those few things, I enjoyed this book!

I would highly recommend this book to anyone who is looking for a new romance novel!

Harper Connelly ran away from her home years ago. Despite leaving town the memories of her old life are never forgotten. They live in the scars on her back. But, Harper is tired of drifting through life without really living. One night she made the decision to request help from tattoo artist Trent Andrews. If anyone can help her, Trent can.

Trent Andrews is the successful owner of the Second Circle. He loves what he does for a living. When Harper asks him for help, he can't deny his attraction to the shy girl in front of him. He's intrigued by her and during the long hours of tattooing her back he wants nothing more than to get to know her better.

~~
Great debut novel! I liked both main characters but the secondary characters were all engaging including Cujo, Pixie and Dred.

I don't even want to imagine what Harper went through. What happened to her can mark anyone for life. She was strong enough to move on. To open her heart to Trent. She knew she could trust him and Trent made her feel important and beautiful which helped her regain her confidence.

Trent was a hottie. When he meets Harper, he knew she needed help and he doesn't hesitate making her feel comfortable. He was very patient, gentle and tender with her.

There was some drama -as expected- but it was not too much.

I'm interested to see the next Second Circle's crew move. I hope is about Cujo.

"The Strongest Steele is forged in the hottest fire. "

A complimentary copy was provided by the publisher via NetGalley in exchange for an honest review.
Posted by MissDaemon at 7:00 AM