The Hurricane by R.J. Prescott 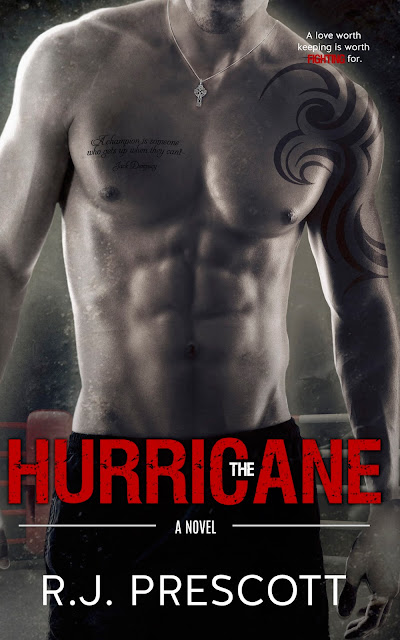 
Emily McCarthy is living in fear of a dark and dangerous past. A gifted mathematician, she is little more than a hollow, broken shell, trying desperately to make ends meet long enough to finish her degree. Through an unlikely friendship with the aging, cantankerous owner of an old boxing gym, Em is thrown into the path of the most dangerous man that she has ever met.

Cormac "the Hurricane" O'Connell is cut, tattooed and dangerous. He is a lethal weapon with no safety and everyone is waiting for the misfire. He's never been knocked out before, but when he meet Em he falls, HARD. Unlike any other girl he's ever met, she doesn't want anything from him. Just being around her makes him want to be a better person. They are polar opposites who were never meant to find each other, but some things are just worth the fight.

I don't know where this book has been my entire life, but I am so glad it somehow found it's way into my life. This was an incredible book that I devoured. My thoughts were consumed by this book, and I needed to keep reading it. It was impossible for me to put this book down. R.J. exceeded all of my expectations with this book. I loved everything about this book! The character, the plot, the action, and the dialogue were all fantastic.

The romance in this book was just phenomenal. R.J. Prescott was able to make the relationship between O'Connell and Emily seem so realistic. The romance developed at a very nature pace, and I was eating it up! O'Connell and Emily were super adorable together, and I think they will go down as one of my favorite book couples.

Their romance was great because it was not just based on sex. Do not get me wrong, there were plenty of steamy scenes that I loved in this book, but there was more than that. The relationship between Emily and O'Connell was built on friendship, respect, and trust. Their relationship helped both of them over come their own personal demons. It was beautiful to watch the two characters grow stronger with the help of one another.


“Each time you let down another one of those barriers, I know that you’re a bit closer to being mine. One day, when the last one falls, you’ll be as much mine as I am yours.”

Another great aspect of this book was the cast of side characters. The secondary characters added a lot of depth to the story. They were all so humorous and lovable. There wasn't a character in this book that I didn't fall in love with (expect for the villains, of course!).

I definitely recommend this book to everyone and anyone. I am in love with this book, and I plan on buying a physical copy for my bookshelf. This book was fantastic, especially for a debut novel! I cannot wait to see what R.J. Prescott has in store for me in the future! I plan on reading all of her books from here on out.

R.J. Prescott was born in Cardiff, South Wales and studied law at the University of Bristol, England. Four weeks before graduation she fell in love, and stayed. Ten years later she convinced her crazy, wonderful fire fighter husband to move back to Cardiff where they now live with their two equally crazy sons. Juggling work, writing and family doesn't leave a lot of time, but curling up on the sofa with a cup of tea and a bar of chocolate for family movie night is definitely the best part of R.J. Prescott's week. "The Hurricane" is her debut New Adult Novel.