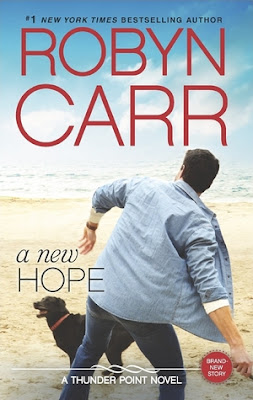 I have wanted to read a Robyn Carr book for a while. I jump in the middle of this series and I'm glad I didn't delay doing it. Yes, I felt lost at times. I didn't realize that Robyn writes her books with the last heroine's life still developing and she begins the path to her next book storyline while getting a full story on the current hero and heroine. Regardless, I thought it was great. I get so much more than just one love story. I felt like these characters were part of a huge ensemble and everyone play an important part in it.

Ray Anne gave her cousin Ginger Dysart shelter when she needed it the most. Ginger had gone through a divorce and a major loss in her life. Moving to Thunder Point has helped start healing. Her job at the flower shop brings her happiness. Despite all this she is lonely. During her first big job at the Lacoumette's wedding she gets groped by a drunk Matt, the bride's brother. Ginger defends herself and the guy ends up in the ER.

Matt Lacoumette can't believe his own behavior and goes in search of Ginger to apologize. After a dinner together, they realized they have a lot in common. A new friendship blossoms. From friendship, loves develops.


“They look like dawn and dusk,” Corinne said.
“The princess and the dark knight,” Ginny said.
“Matt and a second chance,” Ellie said. “She’s so lovely in her heart, isn’t she?”
“Do you think he knows he’s in love with her?” Lori asked.
“He’s a blockhead. He won’t know for months,” Paco said.

I liked both characters. Ray Anne was not going to let a guy become the center of her life again. She was happy with her job and the new friendships. She had lost so much but she was willing to open her heart again. Matt took longer to recognize what he had in front of him but he didn't wait too long either. They made a good match.


“The whole time he was getting closer to Ginger he’d been focused on Natalie and a relationship that hadn’t worked from the start. That was mistake number one. Then he’d built a barrier of self-protection, aloofness. Distance from the woman he knew better after a couple of months than he’d known his own wife in a year. Mistake number two. So, mistake number three would be sitting there like a doofus, acting confused and licking his wounds.”

I'm sure I want to read the next installment to see what is going to happen with Charlie and his mother Lin Su. I wonder who the neighbor is....

“He was going to remember that—your woman needs to be talked to and touched every day. When your woman feels you’re moving away, she feels abandoned and alone. And she changes her phone number.”