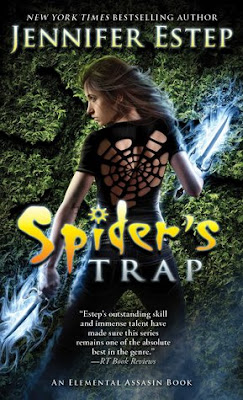 This is the 13th installment in the Elemental Assassin series.
Gin Bianco is the well known assassin, the Spider. She is now the big boss in town and she's responsible for keeping the peace within the criminals. However, not everyone is happy with Gin's new title. There is not a week where she is not being attacked with the hope of getting her eliminated.

Lorelei is someone who has tried to dispatch the Spider frequently, but this time she needs Gin's help. Raymond Pike, her half-brother, is in town and he's seeking revenge. He wants to kill Lorelei and Gin might be the only one who can help her.

I have read this series since its beginning. I'm always happy to come back to Jennifer Estep's world, where Gin is the owner of the Pork Pitt restaurant, but also the strong elemental assassin, the Spider. I was happy to see all these characters making a return appearance, including Bria, Finn, Jo-Jo, Sophia, and of course violet-eyed Owen.

I enjoyed this one even though it was somewhat predictable. The fighting scenes were intense and I wasn't sure how much Gin could endure before it was too late. My heart stopped in one scene but thankfully all is good in the world.

A complimentary copy was provided by the publisher in exchange for an honest review.
Posted by MrsLeif at 11:00 AM