Queen of Blood by Jill Myles 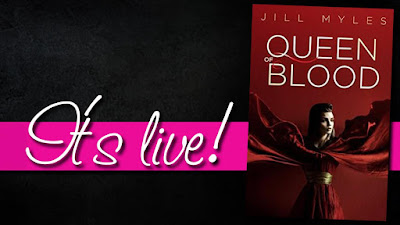 A War is brewing!   Find out what happens in Queen of Blood! For one hundred years, Seri’s people have lived under the thumb of the Blood, the cruel and mysterious rulers of Athon. Seri wants nothing more than to put food on the table and marry the hotheaded but handsome Rilen come spring. But when a noblewoman asks Seri to be her handmaiden, Rilen insists she move to the enemy’s castle . . . and spy on the newly arrived prince.
Prince Graeme has grown weary of his family’s curse. The Blood are powerful and immortal, but doomed to live in the shadows, flitting from lover to lover, always in search of the mythic Eterna—the one woman who will sate their hunger. Now his father has sent him to the outskirts of the empire to stamp out a rebellious Vidari faction. But when a wild and alluring Vidari girl shows up at court, he finds himself torn between following his father’s orders and following his heart . . .
A war is brewing between Athonite and Vidari, between Blood and man. As uprisings sweep through the land, Seri and Graeme find themselves at the center of a storm with only one choice: betray each other, or betray their people. 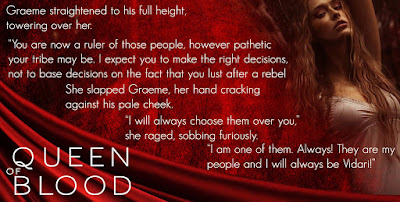 I went into this book not really knowing much about the book, and I was pleasantly surprised with how much I liked this book! I got completely absorbed in the world Jill Myles created in this novel. I would hope to see more books from this world in the future, because I want to continue to learn more and more about the world. This book had a really creative spin on "vampires" that I have never seen done before. I think Jill's take on vampires was very refreshing and creative. I was eating up this book with just that aspect alone.

My favorite character in this book was Graeme. He was a great leader, and it was easy to see that he truly cared about the people that he ruled over. Graeme was genuine and extremely caring. Even though he didn't want to be forced into marriage, he was completely devoted to his wife from the start. He was always so sweet and understanding. Graeme also knew how to make a girl swoon. I fell head over heels in love with him in this book. I wish there would have been more back story on his character. I would have liked to learn more about him and his past. I just want to know more about him in general.


To be honest, the main character, Seri, was kind of annoying. She was quite selfish through out the entire book. She would constantly do stupid things, and then regret it immediately it. Seri also acted very immature and would keep secrets from Graeme all the time. I understood where she was coming from, but it didn't mean that I did not want to smack some sense into her numerous times in the book.

Thankfully, by the end of the book, Seri was making logical decisions and I liked her a lot more. I was very happy to see her character grow from a selfish and annoying girl to a strong and smart woman. Seri definitely had some great character development.

Some of the plot lines in this book were a little predictable, but I still enjoyed the book a lot. I found the story to be quite addicting. The romance was very well written as well. I loved watching Seri and Graeme grow from hating each other to loving each other. They had some extremely sweet moments together, and some extremely steamy moments. I was rooting for them to fall in love through out the entire book. My only issue with the romance was that I would have like to see more romantic moments between the two characters.

Overall, I liked this book a whole lot! I would recommend this book to anyone who is looking for a fantasy/paranormal romance. I hope this book will be part of a series, and not a stand alone. I want to see more of these characters and more of this world.

*I received this complimentary ebook in exchange for an honest review * 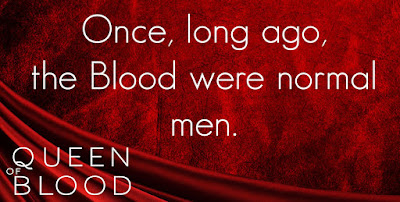 “Lady Mila de Vray,” the priest called.
Finally.
Seri braced herself, readying the cords. Ahead of her, the lady swept into the center of the room, making her grand entrance with small flicks of her fan. Hands spread like she had been taught, Seri matched her steps to Lady Mila’s gliding ones as she carried the excessive train of skirts to the center of the floor. Prince Graeme’s eyes flickered over Seri’s appearance and then back to the lady before him. If he recognized either of them, he gave no indication.
Lady Mila sank down into a deep curtsy, skirts pooling around her.
Behind her, hands tangled in the noblewoman’s train, Seri hesitated. Lady Mila’s deep bow just emphasized the fact that Seri was still standing behind her. Was this all part of the game, then? To force her hand and have her insult the court? Someone coughed, a sound that felt out of place in the stillness, and she could feel the heat of every eye in the room on her.
They can string me up next to Kasmar, she thought. I will not yield to this.
Biting her lip, Seri closed her eyes and bent her head, the closest approximation to deference that she could give.
And she waited. Waited for a signal from Lady Mila, or a jerk of the cords. Waited for the priests to indicate that they would move on. Something.
Then, someone gave a surprised shout and then a low murmur rippled through the crowd. Seri looked up, and gasped. A white glow of light had formed in the center of the room, just above Lady Mila’s head. There was no brazier there, no candelabra, no discernible source for the glow. It had appeared suddenly and of its own volition, as if summoned by the gods . . . or the Athonite goddess herself.
“The Betrothed!” Lady Penella breathed, all tears gone. Shock skittered through Seri. Lady Mila? Truly? The small, cruel part of her was disappointed. Lady Mila would be even more insufferable than before. Poor Lady Aynee had looked to be a more suitable—and amenable—bride for the prince.
The two priests continued to chant the Goddess’s praises, rapt and exultant. The room hummed with whispers and Lady Mila stood bathed in the glow, a radiant smile on her face. The prince stood and stepped down from the dais, and the light continued to grow, until suddenly Seri’s skin felt as though it were on fire. Her stomach churned and she tugged at the cords, suddenly desperate to get free, to get out of this over-warm room, away from the Athonites and their goddess and their strange ways. But before she could move, a heavy hand landed on her shoulder.
The prince. He had walked right past Lady Mila to Seri. . . .
And that was when Seri realized that the white light wasn’t centered around Lady Mila, whose face was pinched and bright red with ill-concealed rage.
It was on her.
Seri’s body went numb. “It’s not me,” she protested. “It can’t be.”
The prince gazed down at her for a long moment, dark eyes emotionless. But she could sense turmoil behind them . . . as if he was as upset and surprised as she was. Seri moved to turn, moved to flee. This couldn’t be happening. She wasn’t Prince Graeme’s Betrothed. She was Vidari, and she had to get home, to Josdi and father. To Rilen—
As if sensing her panic, the prince took her by the elbow, turning her to face the crowd. His grip was tight on her arm, holding her in place. “The Goddess has granted me a Betrothed,” he called out in a flat tone that carried across the still ballroom floor. “Truly, I am blessed.”
The room erupted into wild cheers and angry chatter.
“It’s not me,” Seri said again. “It can’t be.” 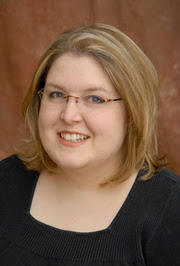 Jill Myles has been an incurable romantic since childhood. She reads all the 'naughty parts' of books first, looks for a dirty joke in just about everything, and thinks to this day that the Little House on the Prairie books should have been steamier.
After devouring hundreds of paperback romances, mythology books, and archaeological tomes, she decided to write a few books of her own - stories with a wild adventure, sharp banter, and lots of super-sexy situations. She prefers her heroes alpha and half-dressed, her heroines witty, and she loves nothing more than watching them overcome adversity to fall into bed together.